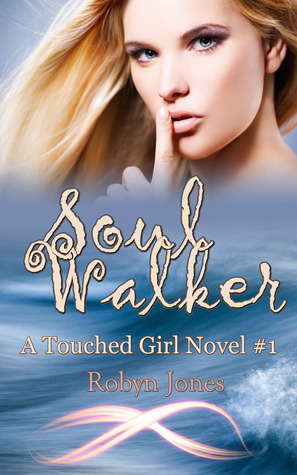 When five-year-old Anna Pierce is offered a chance to have nightmare-free nights for the small price of her voice, she jumps at it. Silence has to be better than all-consuming dreams about blood and death and fangy monsters. The bargain she strikes comes with a secondary benefit, visions of a person's future potential. The combination of visions and silence changes her very nature and soon she's diagnosed with autism. Twelve years of living in her head comes to a screeching halt the moment Peter Davis pulls her out of an icy river.

Her new life has her twirling, tiptoeing, and crashing through unfamiliar territory, one filled with a cranky grandma, a knocked up cousin, an unpleasant cousin, a bunch of mostly good vampires, and the boy who rescued her.

To top it all off, the deal she made at five is no more. Anna is expected to talk, to figure out her resurfacing nightmares, and to control her ever-growing powers. And she'd better get it done soon because if the good vamps want a piece of a living, breathing Touched girl, the evil ones simply want. They'll take Anna for their very own.

First I need to thank Brandee at Bookworm Brandee blog for mentioning that this was one book that she felt was underrated, or words to that effect.I pretty much immediately went and bought and read it. I had never read a book with a main fictional character with autism and actually never thought I would. Add in vampires and this story became one of the most unusual paranormal stories I have ever read. Believe me, that is saying a lot for me.

Anna has always been different, and didn’t speak, but she had great,loving parents that gave her a wonderful life, while growing up on islands all over the world. When a tragedy happens, she goes to live with her grandmother, Ella, in her father’s hometown. Also living in the small town is Peter, the beautiful man that actually saved her from the same fate that her parents met. She’s almost eighteen, and it’s the summer before her senior year of high school, when she suddenly begins to speak again.

Anna just might be the most unusual character that I have met in my reading life. The reader is drawn into her mind and we get to see why she didn’t speak, and how she sees the world around her. She has special abilities in that she can enter other people’s minds(souls) and see futures for people. Her abilities mark her as a Touched Girl, and she is one of a group that has come before her, a group that never lived past childhood-making Anna even more unique.

When she meets Peter, it’s not long before she realizes that he is both vampire and someone that loves her. He’s a pretty great character, I must say. She falls for him just as hard. Besides her grandmother, she also has two cousins, Sara and Betsy, that are around her a good bit of the time. Sara is the same age as Anna, and almost ready to give birth. Betsy is younger and snarky as they come. Peter’s vampire family consists of Jared, Lillian(the oldest vampire) and Lance, her mate. There is of course a villain in the form of Lillian’s twin, Eric, a horrible ancient vampire that wants her for his own purposes.

This story takes the reader on a journey through Anna’s mind, her life, and her realization of what ultimately, she is. Her personality was quirky to say the least. The writing was very well done, but there were a few times that I was a bit confused. Sometimes there would be a sentence said by a character that I felt didn’t make sense inside of the context of the scene, so that threw me off a bit. This was not a big problem, but I felt it needed to be mentioned. It also should be mentioned, that it could be just me and no one else will have that problem!

If you like an unusual paranormal story line, mixed in with the more familiar vampire premise, this could be your next good read. It’s a good, if unusual, romance, but it’s also full of it’s share of action, violence, and some characters with nefarious intentions. I can honestly say it’s not a book I will forget anytime soon. Big plus? The next two books in the series are already released.