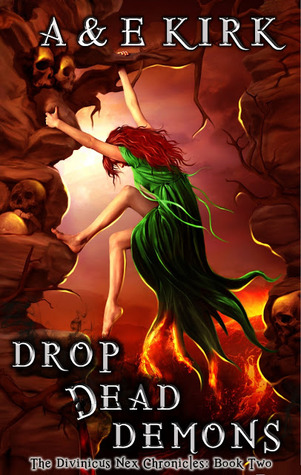 Survival. It's an on-going battle.

GOING ON A TREASURE HUNT...
Aurora Lahey finally knows why supernatural slayers salivate to slaughter her, but how to stop them? Not so much. Sure, she's discovered her own lethal powers, and has six sexy, super-charged, demon hunting Hex Boys watching her back--the hottest one watching every part of her. But when a seductive stranger delivers a deadly ultimatum, Aurora and the Hex Boys plunge into a do-or-die hunt for a legendary Mandatum treasure, which will finally shift power in their favor. Or unleash hell on earth.

NEX MARKS THE SPOT...
Pursued by demons of mythical proportions, Aurora and the Hex Boys race deeper into the shadowy world of a centuries-old mystery and brutal conspiracy, where no one and nothing is what it seems. Where love and betrayal go hand-in-hand, and trusting the wrong person not only breaks your heart, but gets you killed.

DEMONS ON YOUR TAIL...
Uncovering shocking secrets from the Hex Boys' past, hiding her Divinicus Nex identity, lying to her pretend-wish-he-were-real boyfriend, dodging demons, breaking into ancient tombs, taking the unexpected side trip to the dark depths of the Waiting World, tracking a traitor, and passing Physics...Aurora could do that in her sleep. Or more likely, die trying.

Demons at Dead Night was a very recent read for me and I loved the whole thing. So it was a no brainer that I pick up Drop Dead Demons and dive right back in as soon as I finished the first one. I think I probably should have waited a couple of weeks or at least read a couple books in between, because it took me way too long to read the second one. The two books together equal around a thousand pages, and it was just too much for me. Does that make sense? I would probably say that about any two books from the same series that equaled that many pages-not just this one. Just a heads up, since this is a second in a series, there might be spoilers ahead.

Aurora is special, and only one of her kind is born a hundred years after the last one dies. Now she knows what she is, and has the Hex Boys to both help her with demon killing and help to protect her. She is no longer thinking she is crazy, as she had for a long time since she started seeing demons. The Hex Boys are all guys she knew as a child, recently met again, and they each have a special ability to kill demons. One of them, Ayden, is Aurora’s boyfriend. I have my suspicions that he is also something else to her-something important-but I am keeping that to myself. The two of them together have major chemistry, and a great friendship as well. All of the Boys have big, or different personalities and really made these books for me. Of course I enjoyed Aurora’s feisty and sarcastic character as well. Aurora oozes snark, much of it directed at her own self.

This time around, the story really delves into mythology and features Artemis, Eros, and Aphrodite. Now I am not a mythology aficionado by any means, so I am not going to tell much more than that, except to say that they all have their own agendas’ and a lot of that involves taking and/or killing Aurora. The hidden tunnels under the town are a major setting for the story in this book. Perfect for all kind of demon attacks and major action scenes. And therein lay my one problem with this particular book. I know it’s about demon hunting, but there just was way too much fighting, and since this book was really long, it did get a bit old after a time. Again, that could be because I read the two back to back, but I really thought it could have been a bit shorter, making it more tightly written. However, other than that, it is very well written.

I really loved the main group of characters as much as I did in the first book. I especially enjoyed all of Aurora’s snark, and all of the guys doing their own special gift things. And Aurora and Ayden together were really a fantastic part of the book. But then I always love a good romance and this is a good one! I cared what happened to all of these characters, including Aurora’s big close knit family. Well, most of the characters anyway-not so much the Greek Gods! There’s also another character I really liked..well kind of a character; Fido is a monster that has a blood bond with Aurora and ended up being a favorite part of the read anytime he/she was involved. Imagine having a monster follow you around like a dog.

Fun read, but maybe a tad too long. I highly recommend this to young adults, and adults that love urban fantasy, and even paranormal romance. Lots of humor makes for a good read for just about any reader.