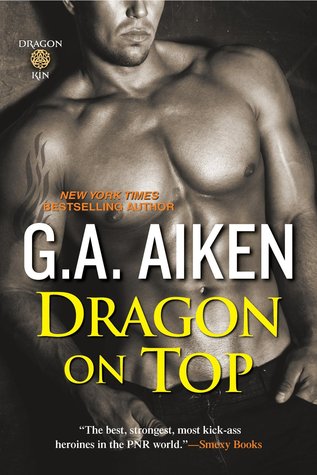 I am Glheanna the Decimator. I am a warrior. A soldier. I know no fear. No pain. No mercy. I do, however, know acute embarrassment! How could I not after getting dumped by a bastard dragon in front of my own troops? So I tuck tail and return to my cave, drowning my sorrows in ale—as is my family’s way. But instead of leaving me to my misery, I’ve been summoned to the Dragon Queen’s court.

As if my life wasn’t pathetic enough, Her Majesty now has me escorting the highborn Bram the Merciful through dangerous territories—not exactly the best use of my military training. And just so he can negotiate with enemy dragons instead of battling them? Honestly, what has my world come to? Then again…Bram is quite easy on the eyes. And the perfect distraction for what ails me. Perhaps I’m looking at all this the wrong way. Maybe there is a place for a little “mercy” in my life…

I love the G.A. Aiken Dragon Kin series. I’m not very far into it. I started it very late and I let my reading of the books slip. When I saw this book was available for review and was a prequel, I jumped on the chance to review it. If you’ve never read a G.A. Aiken book, they are hilarious. She also writes under the name Shelly Laurenston.

This is the story of Bram the Merciful and Glheanna the Decimator. Two dragons that could not be more dissimilar if they tried. Bram is basically the dragon version of a nerd. He is all about books and scrolls. He is the peacekeeper and delegate, working hard to keep the different dragon species from war. Glheanna has been summoned to escort him work a deal with the sand dragons. Glheanna is everything Bram is not. She is a warrior and a tom-boy and so not a royal.

Ms. Aiken delivers a great tale as these two come together. Glheanna’s family is a hoot. Most of her family is just like her. They are all warriors and have a tendency to solve disagreements with headbutts. Although her mother, sister and even her father (in his older years) are a little bit more cultured. They have always liked Bram and have had him over to the family dwelling many times, though Glheanna never seemed to notice. He always thought she ignored him, but truthfully, she never even noticed him. Bram has a hard time deciding what is worse.

Their trip to the sand dragons is sidetracked when Glheanna is injured. Bram takes her to the only place he can think of. To a group of underwater dragons, called “fins”. It was interesting seeing this underwater world. It was also great seeing how Glheanna and Bram interact with them. Glheanna takes to the warriors like a duck to water. We also get to see a little bit of Queen Rhianna and Bercelak, her crazy consort. They always crack me up.

All in all, this was a short, but really fun read. There wasn’t a much romance in it as I’m used to in these stories, but I found that okay. I’m more interested in the humor, characters and the great world that Ms. Aiken builds, than the romance anyway. She delivered the humor in spades. This proves that I need to pick this series back up. I’ve already requested the next book in my list on this series from the library. I’ll be reading it soon. Expect more reviews from this series from me in the near future.