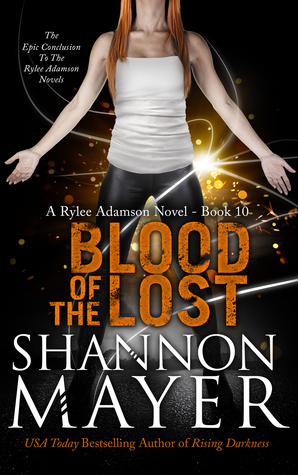 THE EPIC CONCLUSION TO THE RYLEE ADAMSON SERIES!

My final salvage, and this time I’m playing for the survival of the entire world.

I have my allies, and my loved ones with me and while they fight with all they have, it is not enough.

There is only one thing left for me to do. Face Orion. Seal the Veil closed and send the demons back to where they came from.

But Orion knows my weakness. And he has stolen her away leaving me with a choice I never wanted to face.


BLOOD OF THE LOST passed my final installment must-have checklist with flying colours; all of this series’ characters were in attendance (both living & deceased), no stone was left unturned with regards to pending questions, and the do-or-die battle was glorious. Heck, I even liked how the love triangle was settled, and that there was actually a legit reason for Shannon Mayer’s unusually high body count instead of just an author’s prerogative.

There was no shortage of explanations in this book, and I was surprised by how well thought out they all were. Minor threads tend to slip along the way forcing quick convenient resolutions, but not Mayer, her wrap-up was so clean it squeaked. I was very impressed with her plotting prowess, and how every tangent was brought to a fitting conclusion without compromising the pacing or action. It’s apparent that all of the outcomes were outlined in advance, and that nothing was incidental.

Rylee has evolved into a powerhouse over the course of ten novels, and yet she was stripped of everything that made her special ability-wise when she confronted Orion which forced her to dig deep, and ensured that the closing fight was fresh and unique. However, as much as I appreciated that fact, and that all of the supernatural factions contributed; I was bummed by the author’s trust-in-the-power-of-love approach as opposed to her customary stabby-stabby. It was kinda… trite.

While awaiting this title I started reading THE ELEMENTALS series, and found the timeline somewhat confusing, so I’d recommend following RYLEE ADAMSON to its completion prior to commencing Lark’s story. Mayer came dangerously close to two of my deal breakers (i.e. character revival & a love triangle HEA where both guys win) only to pull out of her hair-raising nose dive, and reach an outcome that was beyond satisfying after such a close call with the ghastly alternative.

BLOOD OF THE LOST is proof that you CAN have your cake and eat it too!

4 responses to “Review: Blood of the Lost by Shannon Mayer (@TheShannonMayer)”