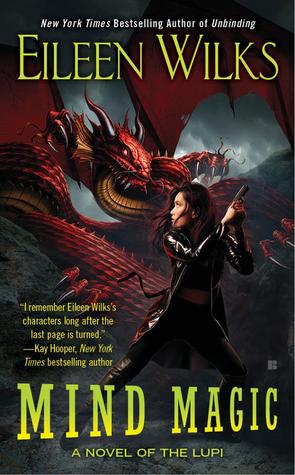 Thanks to the mindspeech lessons she’s receiving from the black dragon, Lily is temporarily benched from Unit Twelve—until her brain acclimates and the risk of total burnout passes. At least she has her new husband, lupi Rule Turner, to keep her occupied.

But when her mentor calls in a favor and sends Lily to a murder scene, she’s suddenly back on active status—despite the hallucinations she can’t keep at bay. With one touch, Lily knows the man was killed by magic, but her senses don’t warn her how far the conspiracy goes…

A shadowy force within the government wants to take Unit Twelve down, and they don't mind killing to achieve their goal. With none of her usual resources, Lily is up against impossible odds--because with her mind in disarray, she can’t trust anything she sees.

When I first found this series a few years ago, I read the first three almost back to back. For whatever reason, I quit reading the series after that. When I recently had the chance to read this book, number 12 in the series, of course I said yes, although I wondered if I would be lost from jumping so far ahead in the series. That really didn’t happen-just a few things here or there that I didn’t understand. I ended up really happy with my decision to read this book.

Lily and Rule met and mated in the first book of this series. Lily was a human cop, and is now working for an ultra secret part of the government that deals with magic problems. Rule is a werewolf and is heir to the head position of his pack, otherwise known as Rho. He is also Rho of another pack as well-which is really rare in the world of the Lupi. In this installment, they are in Washington D.C. staying at Reuben’s home. Reuben is Lily’s boss, and is now a Rho of his own pack as well. We are introduced to a new character, Demi, or Danny, as she wants to be called. She has Asperger’s syndrome(a type of highly functioning autism) and was a really different sort of character. She’s brilliant, a computer whiz, and she has a talent similar to Lily’s, as she can tell by touch if someone has magic and what kind of magic they have. She had been recruited by Edward Smith, a government bureaucrat, who on his own(with some cohorts)is illegally putting children with different magical abilities in a refuge, so he can use them. He has a very evil agenda and is planning on taking down the Lupi, Rule, Reuben and their government agency. Danny is on a mission to thwart Edward.

I enjoyed Danny’s character immensely, and of course Lily and Rule. But this time around, Brownie’s as a whole took precedence with me. Not sure, but they were probably introduced in a previous book by this author that I haven’t yet read. Wilks must have had a great time writing them and creating a Brownie world, because I sure had a great time reading about them. They are the sort of supernatural character that you wish really existed. Dragons were also prominently featured in this read as well. The Dragon world building was almost as interesting to me as the Brownie’s was. All of this world building is intricately woven around the premise of this book, one that features so much action and suspense that In the end, I couldn’t stop reading.

It would be remiss of me not to mention the one thing that did bother me about this read. In the beginning, the book was slow, and I almost put it down. And actually, I started it a couple of times, before I settled in, and really got into the read. However, once you get past the slow start, I promise you that it’s worth it. I would have read this for the brownies alone! And one beautiful scene with a red dragon and her major secret, really added to the tale as well.

So it’s a mystery, a conspiracy, and features dragons and brownies-not to mention all the werewolves involved. Mega amounts of action, a kidnapping, mate bonds going haywire, hallucinations on Lily’s part, and some sad deaths, add to the story. Throw in some excellent characters and villains, and you have a great read, one that I highly recommend to urban fantasy readers, ages 16 plus.