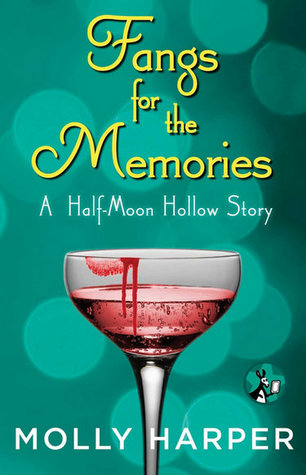 “Molly Harper writes characters you can’t help but fall in love with” (RT Book Reviews), but how did Andrea and Dick Cheney fall in love? Join Half-Moon Hollow’s favorite couple for a trip down memory lane—to a time when Mr. Wainwright was newly dead, Jane Jameson was a newbie vampire, and a budding paranormal romance was not yet uncorked…

Half-Moon Hollow’s supernatural social event of the season—Zeb’s Titanic-themed werewolf wedding—is coming up, and Dick Cheney (not that Dick Cheney!) needs a date. But Andrea’s had enough of clever, handsome, and rakish to last a lifetime, and Dick Cheney is certainly not the sort of man you bring home to mom (not that Andrea’s deadist parents are speaking to her ever since she dropped out of college and became a blood surrogate.) Shameless, relentless, roguish, with a Stetson-worthy swagger, a naughty sparkle in his eyes, and a constant smirk—oh, and fangs—no, Dick is the last person (er…vampire) Andrea wants to date.

But the infuriatingly irresistible man who lives quietly on the edge of a criminal underworld knows exactly what he wants, and once he surprises Andrea with a thrilling hot and dirty kiss behind the paranormal bookshop, she knows what she wants too: Dick. All it takes to ignite their unconventional courtship is a near-undeath experience that confronts Dick with a choice between turning Andrea, losing her forever, or tapping into his countless shady resources in this hilarious and heartwarming enovella that revisits the early days of Molly Harper’s Nice Girls series—one that “makes me laugh and laugh” (USA TODAY).

I was hesitant to jump straight into this one with it being labeled HALF-MOON HOLLOW #4.5 because I read it before THE SINGLE UNDEAD MOMS CLUB (book 4), and was worried about bouncing around Molly Harper’s universe too much. Her titles usually stand well enough on their own though, so I went for it. FANGS FOR THE MEMORIES was an easygoing e-novella featuring one of my favourite characters, and a fab way to spend my breaks at work.

Getting the low down on how Andrea had eluded Dick Cheney’s charm when all other women have failed was interesting. Ex-boyfriend horror stories are fairly common, but this girl’s is a little more messed up than most. It helped me to better understand her, instead of being confounded by her lack of interest in such a choice cut of vampire.

This short wasn’t as funny as expected. Cheney usually has me snickering over practically every scene he’s in; however in this particular instance he was fully focused on the prize, winning Andrea’s heart. I know, I know, it’s Paranormal Romance, so that should have been a given, although honestly I would have been happy with a 100 page long Dick monologue!

I really enjoyed the Ophelia & Sophie bit, and getting another perspective on Zeb & Jolene’s werewolf wedding was definitely a perk. Andrea & Dick Cheney had some pretty tender moments as well. I especially liked his speal to her at the end when she finally caves, and agrees to give “them” a chance. It was simply the perfect amount of aaaww.

I’m always in the mood for more Molly Harper, and FANGS FOR THE MEMORIES hit the spot!

12 responses to “Review: Fangs for the Memories by Molly Harper (@mollyharperauth)”