We’re chatting it up with author, Katie MacAlister, as part of her DRAGON STORM release week blitz. There’s a short excerpt, and a wonderful giveaway for you to check-out as well. So, please give a Rabid welcome to today’s guest, and her sexy dragons!

1. What would readers be surprised to find out about you?

[box]Goodness. So many things, I would expect. Perhaps the fact that I never went to high school (but did go to college). Or that I wanted to be an astrophysicist. Or maybe that I have a bunch of very slight touches of facial blindness, dyslexia, and synesthesia. All of which makes it an adventure when writing out a check that has amounts using 4 or S (both of which are red).[/box]


2. Tell us about your writing process. Do you start with an idea or a character? Do you know what’s going to happen from the beginning or do you figure it out as you write?

[box]It really depends on the story in question. Some I go into with a very clear picture of who the characters are, what they want, where they’ve been, and so on. Other books I have an idea for a story and work that out a bit before figuring out what sort of character would have the most issues with the plot. And some books, like Dragon Storm, have recurring characters, so I know what they’ll do in any given situation, although Constantine manages to throw me every now and then by doing something surprising.[/box]


3. Who gave you the one piece of writing advice that sticks with you to this day?

[box]Surprisingly, no one. I think the reason I write is because I’m a lifelong reader, and have been from a very early age. Reading so many good books gave me the desire to write and tell my own stories, and more or less served as an example of what to do and what not to do.[/box]


4. Is there one thing you have to have when writing?

[box]I’ve always wanted to be one of those fancy people who had a lovely writing nook, with soft lights, an ergonomich chair perfectly molded to the body, soft music playing, and candles burning to provide just the right ambiance needed to put words on paper. The sad reality is that I have to write with dogs running around crashing into each other and furniture while flinging various toys and bones onto my lap to entice me to play, my cat trying to sit on my knees in her daily attempt to crush my kneecaps, the phone ringing at the most inopportune moments, and all the other chaos that life throws at us just when we want to be left alone. So no, I don’t have any writing rituals, but I dearly yearn for the day when I can have some.[/box]


5. How did you choose the names of your characters?

[box]I love historical names, so I tend to hang out on census sites, looking up naming patterns for whatever era is pertinent. I also love ethnic names, so I maintain a list of names that I like and want to use one day. Also, I have a great book that lists every character in Shakespearean works, and pull from there a lot, too.[/box]


6. How has music played a role in your life and in your writing?

[box]I love music, but don’t need it to write—however, I often have Pandora on simply to drown out some of the sounds of animals playing, other people doing things in my house, etc. Sometimes I set up soundtracks to go with a book, but other times I just pick a channel on Pandora and let it go. One of my go-to channels is House of the Rising Sun, which has all the old 1970s music on that I that I remember from my childhood.[/box]


7. When was the moment that you knew you had to be a writer?

[box]When I turned in a non-fiction manuscript. I turned to a friend who was visiting at the time, and told her, “Now I’m going to write a novel.” Non-fiction was just so dull and limited, that I wanted to have some fun with a book, and write characters, and dialogue, and make people suffer. In a literary sense, that is.[/box]


8. What can you tell us about your couple, that we won’t find in the book?

[box]Constantine has deep, deep emotions that he’s hidden for a very long time due to a variety of horrific experiences. Bee is the only person he’s felt comfortable with enough to let her have a peep at those emotions, and to tell her the truth that he’s hidden for so many centuries. Bee, on the other hand, is pretty much an open book, but she’s more than a little surprised by the depth of emotion she feels for a man who she’s always considered was if not the enemy, then someone she needed to avoid.[/box]

For as long as she can remember Katie MacAlister has loved reading, and grew up with her nose buried in a book. It wasn’t until many years later that she thought about writing her own books, but once she had a taste of the fun to be had building worlds, tormenting characters, and falling madly in love with all her heroes, she was hooked.


With more than fifty books under her belt, Katie’s novels have been translated into numerous languages, been recorded as audiobooks, received several awards, and are regulars on the New York Times, USA Today, and Publishers Weekly bestseller lists. A self-proclaimed gamer girl, she lives in the Pacific Northwest with her dogs, and frequently can be found hanging around online. 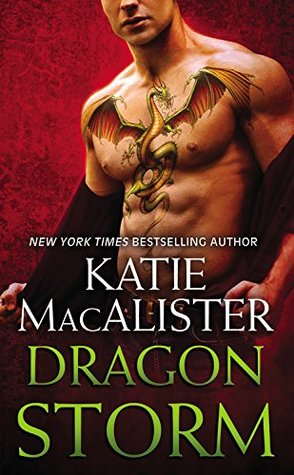 TURN ON THE CHARM

According to some (including himself), Constantine is one of the greatest heroes of dragonkin who ever lived. Too bad he’s now lonelier than ever and his biggest adventure involves a blow-up sheep-until he has an opportunity to save his kind once again. All Constantine has to do is break into a demon’s dungeon, steal an ancient artifact, and reverse a deadly curse. The plan certainly does not involve rescuing a woman . . .

TURN UP THE HEAT

Bee isn’t sure whether to be infuriated or relieved when Constantine pops up in her prison. The broody, brawny shifter lights her fire in a way no one ever has before, yet how far can she really trust him? Their chemistry may be off the charts, but when push comes to shove, Constantine will have to make a crucial choice: to save the dragons or the woman he’s grown to love with fierce intensity.

I assumed that even a spirit dragon would be familiar with the most famous nightclub in all of Europe—at least so far as denizens of the Otherworld went—but I was sadly mistaken.
“What are we doing here?” Constantine silently read the curved text over the door. “Goety and Theurgy.”
“G&T is a club, yes. It’s the club for the Otherworld, and is the home ground of the Venediger—the woman who more or less polices all immortal activity in this area of the world—and is the most neutral meeting place in Europe. All of that is why we are here.”
Constantine glanced around, sending piercing looks up and down the street. It seemed that he didn’t like what he saw because he left me to stroll a few yards down the road to where he subjected an intersection to further scrutiny. This section of Paris had few mortal visitors, despite it appearing to be nothing more than a slightly eccentric neighborhood.
I tried not to notice how the slight breeze rippled Constantine’s shirt against his chest, or how the little hairs on his arms gleamed golden in the late afternoon sun, and how the same gold threads glittered in his shoulder-length mane of hair.
Worse yet, I could still remember the feel of that kiss he had planted on me in Seville. I badly wanted to believe that he had taken me by surprise, and that’s why I’d allowed it to go on as long as it had, but my father had made sure that both Aoife and I knew how to protect ourselves from unwanted advances, and unfortunately, the thought of self-protection hadn’t even entered my mind when Constantine had kissed me.
All I could think about was how hot his mouth was, and how much hotter I wanted him to make me feel. I shook that thought away, and tried to focus on the here and now.