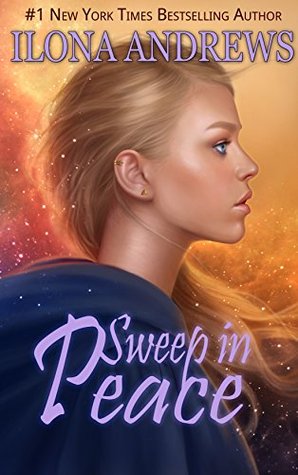 Dina DeMille doesn’t run your typical Bed and Breakfast. Her inn defies laws of physics, her fluffy dog is secretly a monster, and the only paying guest is a former Galactic tyrant with a price on her head. But the inn needs guests to thrive, and guests have been scarce, so when an Arbitrator shows up at Dina's door and asks her to host a peace summit between three warring species, she jumps on the chance.

Unfortunately, for Dina, keeping the peace between Space Vampires, the Hope-Crushing Horde, and the devious Merchants of Baha-char is much easier said than done. On top of keeping her guests from murdering each other, she must find a chef, remodel the inn... and risk everything, even her life, to save the man she might fall in love with. But then it's all in the day's work for an Innkeeper...

I had a minor issue with INNKEEPER CHRONICLES #2. Obviously, I still enjoyed the book—very much—but the problem can’t go unaddressed, and I feel like I’ve painted a more negative picture than I intended to.

You have been duly disclaimed.

I recently had an opportunity to read the opening chapters for an Andrews’ work-in-progress. I was told in advance that it was darker than what they usually write, and I mistakenly equated “darker” with violence. In hindsight, it was a naïve thing to do—the Andrews have never shied away from violence—and now I think SWEEP IN PEACE is similarly darker.

For years, myself and many others have been begging the Andrews to write something about the younger generation from their THE EDGE series: Jack, George, Gaston, and Lark/Sophie.

They finally have, and I almost wish they hadn’t.

Now that the excitement of seeing them again has worn off, now that I’m rereading the installment in its entirety, I can see these adult versions of the children who stole my heart more clearly . . . and what I see . . . It’s darrrrrrk.

Jack and Gaston are mostly present for comic relief, but George . . . he’s as intelligent as ever, but now he’s also unscrupulous. Gone is the boy whose life was slowly draining away b/c he couldn’t bear to let things die. Instead, he’s a master manipulator. He treats those around him as pawns in his long game.

The fact that he’s obviously pained by the necessity of his actions only makes it worse.

Lark . . . She’s an adult version of the traumatized child who hung dead animals in her tree so she wouldn’t starve when her family ostracized her for being the monster she still believes she is.

But as painful as parts—it’s NOT just one big kick in the teeth—of SiP are, it’s still pure Andrews’ brilliance.

At the end of CLEAN SWEEP, Sean left Earth to repay a favor and to experience the universe. Four months have passed, and the Gertrude Hunt is empty except for permanent guest Caldenia:

“Dina, I’m bored,” Caldenia announced.
Too bad. I guaranteed her safety, not entertainment. “What about your game?”
Her Grace gave me a shrug. “I’ve beaten it five times on the Deity setting. I’ve reduced
Paris to ashes because Napoleon annoyed me. I’ve eradicated Gandhi. I’ve crushed George Washington. Empress Wu had potential, so I eliminated her before we even cleared Bronze Age. The Egyptians are my pawns. I dominate the planet. Oddly, I find myself mildly fascinated by Genghis Khan. A shrewd and savage warrior, possessing a certain magnetism. I left him with a single city, and I periodically make ridiculous demands that I know he can’t meet so I can watch him squirm.”

Oh, yeah. Caldenia is still creepily fantastic. And bored. Which strikes me as highly concerning.

Luckily, before she can get into trouble, the inn alerts Dina that a guest has arrived.

That guest is George.

He is now an arbiter, and he has been given the task of mediating a peace conference between three warring factions. He would like the conference to take place at Gertrude Hunt.

Hmm . . . On the one hand, such a large event would sustain the inn for months, maybe years. On the other hand, two of the warring parties:

. . . hated each other so much their feud had become legendary. Half the jokes in the galaxy started with “a vampire and an otrokar walk into a bar….”

Which is hilarious, but not at all conducive to successful negotiations for peace.

BUT (of course) Dina decides the benefits outweigh the potential for catastrophe, so she agrees to host the summit with only two days to prepare before the 36+ mortal enemies guests arrive.

YES. That is a lot of mortal enemies guests. Especially considering Dina has no staff. With only Caldenia in residence, she doesn’t need staff. She cooks the meals, and the inn takes care of everything else.

But Dina’s primary role as Innkeeper is to preserve neutrality, so someone else will need to do the cooking. 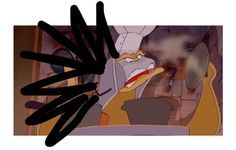 My future chef was an oversized, hysterical hedgehog with a martyr complex.

YES. I did make that myself. Those black things are hedgehog spines. Obviously. Geez.

But as entertaining as Caldenia, Orro, Jack, Gaston, etc. are, they can’t negate the aforementioned darkness.

Everything that happens in SiP is an extension of the peace negotiations. Peace negotiations that are taking place b/c all three factions have lost so much, watched helplessly as loved ones have died, they are willing to meet, face-to-face, across the table from the source of their grief.

These people are tired. Heartbreakingly so. They are filled with bitterness, and they are desperate for all of it to mean something.

SWEEP IN PEACE isn’t a walk in the park. It’s not a lone alien assassin with nasty lizard Rottweilers terrorizing neighborhood pets. You can’t just kill the Bad Guy and get back to business as usual.

War has permanent consequences, especially for the survivors—once you’re dead, you’re dead. But those left alive when the treaty is brokered . . . They have to find a way to move past the horror of what they’ve seen and what they’ve done.

And as the reader, there’s no escaping that knowledge.

That being said, Caldenia and co. do dull the sharp edges. And sometimes characters have to survive a purifying fire to become who they’re meant to be . . . It’s the untried youths who are excited about the glory they’ll win in war. It’s the veterans who know war is anything but glorious.

The INNKEEPER CHRONICLES by Ilona Andrews falls under the umbrella that I like to call MUST READ, and SWEEP IN PEACE is its most recent chapter. It is awesome, it is terrible, and you will cry. So arm yourself with some quality chocolate, and read it for yourself. Nothing worthwhile is completely painless, and if yer too chicken to walk this road with these beloved characters, you don’t deserve to reap the benefits of what comes next. *drops mic and walks away*