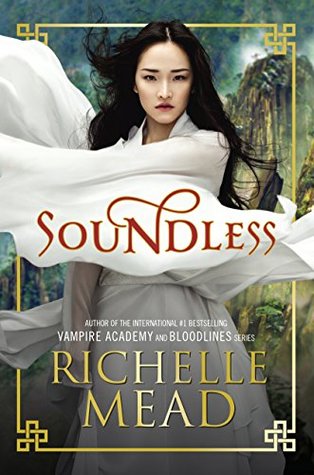 For as long as Fei can remember, there has been no sound in her village, where rocky terrain and frequent avalanches prevent residents from self-sustaining. Fei and her people are at the mercy of a zipline that carries food up the treacherous cliffs from Beiguo, a mysterious faraway kingdom.

When villagers begin to lose their sight, deliveries from the zipline shrink and many go hungry. Fei’s home, the people she loves, and her entire existence is plunged into crisis, under threat of darkness and starvation.

But soon Fei is awoken in the night by a searing noise, and sound becomes her weapon.

Richelle Mead takes readers on a triumphant journey from the peak of Fei’s jagged mountain village to the valley of Beiguo, where a startling truth and an unlikely romance will change her life forever....


It’s one thing to cerebrally acknowledge that the heroes of stories are brave . . .

But when an author is able to capture that bravery, the fearlessness in the face of adversity, the lack of self when others face harm or death if they remain ignorant to newly discovered information . . . That is the foundation of a truly great book, and that is exactly what Richelle Mead has done in SOUNDLESS.

Fei and her people have lived on the top of their mountain for generations. Hundreds of years ago, they also lived and farmed the fertile valleys beyond the mountain pass, but an avalanche blocked the pass, and ever since they have been dependent on the line keeper.

The line keeper sends food and supplies via zip cord, which has always been there and leads no-one-knows where.

As an artist, it is Fei’s job to record the daily life, to preserve the history in text and picture, to capture the growing crowd of beggars who have lost their sight and have never had sound. Beggars who can do nothing but sit in silent darkness, slowly starving, waiting for handouts from a dwindling food supply.

Fei is to observe, never interfere. She is separate from the lower working classes of miners and servants.

Except Fei herself grew up in a mining family. The boy she loved but can never marry (Li Wei) is a miner still. And when her sister, the last surviving member of her family, begins to lose her sight, Fei can no longer simply observe . . . So when an avoidable tragedy claims the life of Li Wei’s father and he decides to climb down the mountain and confront the line keeper, Fei decides to go with him.

What follows is an incredible journey of discovery. Of life off the mountain. Of lies and abuse. Of kernels of truth in old stories. Of determination and hope and perseverance. Of new beginnings.

And it is truly lovely.

SOUNDLESS by Richelle Mead is her greatest work to date and completely unlike anything else she’s ever written. An instant classic, it deserves shelf space in every library, every home, and should be told and retold to audiences of all ages. I don’t know if it’s a new version of an old story or an entirely new tale based on the Chinese folklore that inspired it . . . Either way, it’s as beautiful as is it timeless. Highly recommended.