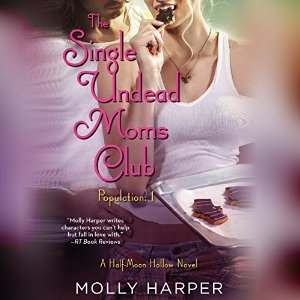 In the next book in Molly Harper’s Half Moon Hollow paranormal romance series, Libby (a widow-turned-vampire) struggles with her transition, and finds out it sucks to be the only vampire member of the PTA…

Widow Libby Stratton arranged to be turned into a vampire after she was diagnosed with late-stage cancer. It wasn’t the best idea she’s ever had, but she was desperate—she’s not about to leave her seven-year-old son to be raised by her rigid, overbearing in-laws.

On top of post-turning transition issues, like being ignored at PTA meetings and other mothers rejecting her son’s invitations for sleepovers, Libby must deal with her father-in-law’s attempts to declare her an unfit mother, her growing feelings for Wade—a tattooed redneck single dad she met while hiding in a closet at Back to School Night—and the return of her sire, who hasn’t stopped thinking about brave, snarky Libby since he turned her.

With the help of her new vampire circle, Libby negotiates this unfamiliar quagmire of legal troubles, parental duties, relationships, and, as always in Harper’s distinct, comedic novels, “characters you can’t help but fall in love with” (RT Book Reviews).


THE SINGLE UNDEAD MOMS CLUB was one of the more distinct installments of this series due to the heroine having to go through the usual I’m-now-a-vampire adjustment routine while also keeping one foot in the human world for her son’s sake. The role of mentor looked good on Jane Jameson, Mr Dick finally got some respect, and Bigfoot was spotted in the parking lot at Tim Hortons because really, where else can you get a decent cup of coffee in Canada!?

The story was kooky, but completely relatable as well; Libby is a single parent dying of cancer who resorts to going on Craigslist to look for a vampire sire in order to not orphan her child. Desperate times call for desperate measures! However, the outrageousness that happens after her initial transformation was all Molly Harper’s doing. The Strattons have got to be the worst in-laws EVAH, and root canals have got nothing on HALF MOON HOLLOW PTA meetings.

The romantic plot was a bit of a disappointment what with it turning into an impromptu love triangle, and the obvious candidate didn’t receive nearly enough page time IMO. Libby and Finn’s connection was rocky at best, and I just didn’t get the reason for their burning attraction other than the blood link. Wade upped the sex appeal of dad’s everywhere with his tattoos, redneck take on parenting, and playful approach to dating.

No narrator does silly quite like Amanda Ronconi with her limitless energy, knack for having her smile come through in her voice, and ability to control her delivery until the punch line. She nailed the nutty interactions between the grown-ups and kids, and she slipped back into old characters as though she’d recorded their tales yesterday. There were some minor issues with a few of the transitions, but otherwise Ronconi does it again!

THE SINGLE UNDEAD MOMS CLUB was an enjoyable staycation.