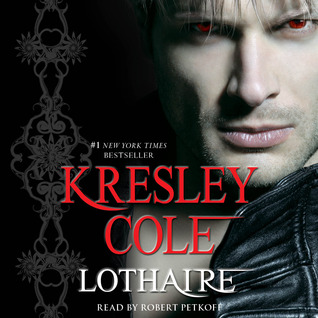 All fear the enemy of old.

Driven by his insatiable need for revenge, Lothaire, the Lore's most ruthless vampire, plots to seize the Horde's crown. But bloodlust and torture have left him on the brink of madness - until he finds Elizabeth Peirce, the key to his victory. He captures the unique young mortal, intending to offer up her very soul in exchange for power, yet Elizabeth soothes his tormented mind and awakens within him emotions Lothaire believed he could no longer experience.

A deadly force dwells within her.

Growing up in desperate poverty, Ellie Peirce yearned for a better life, never imagining she'd be convicted of murder - or that an evil immortal would abduct her from death row. But Lothaire is no savior, as he himself plans to sacrifice Ellie in one month's time. And yet the vampire seems to ache for her touch, showering her with wealth and sexual pleasure. In a bid to save her soul, Ellie surrenders her body to the wicked vampire, while vowing to protect her heart.

Elizabeth tempts Lothaire beyond reason, as only his fated mate could. As the month draws to a close, he must choose between a millennia-old blood vendetta and his irresistible prisoner. Will Lothaire succumb to the miseries of his past - or risk everything for a future with her?


The hype vis-à-vis LOTHAIRE’s story has been gradually building with every IMMORTALS AFTER DARK installment, and albeit three years later, I now understand why all of my fellow bloggers were fan-girling it up over the Enemy of Old. Most authors hold back when developing their anti-heroes because there’s a thin line between Bad Boy and a-hole, but not Kresley Cole, she went full-on bastard, and I absolutely loved her for it!

Every addition to this series brings with it its own romantic flavour, and none of them have been repeats which after eleven novels is gosh darned impressive. The plot threads of all that has come before continue to intermingle in startling ways, and characters reach new levels of growth even though their tale has already been, or has yet to be told. The century long feud between the Black King and the White Queen left me chomping at the bit for more, and I hope that Thad gets his own title because well, listen to a sound clip, and you’ll get it.

I liked that Cole dedicated several chapters to fleshing out Lothaire’s history; it painted a clear picture of his depravity, and the unbreakable vows that bind him. Daciano is Evil with a capital E, and I don’t in any way approve of his treatment of Ellie, but when cruelty has always been a part of your life, happiness seems like a pipe dream. It’s funny how the mate you want, and the one you need can be two worlds apart; Elizabeth’s stubbornness, trailer park ways, and blood is thicker than water views on family made her the perfect for Leo.

The narrator’s mountain twang demonstrated for the umpteenth time that even the most far-out POV is akin to child’s play when left in his capable hands. Robert Petkoff’s transitions between Russian immortal royalty, and Appalachian hillbilly had me sweating bullets one moment, and hollering with redneck sisterhood the next. The voice he used for La Dorada still keeps me up at night sometimes while as Thaddeus’ Texan accent has scored prime real estate in my audiobook spank bank. Oops, did I just say that about a seventeen year old albeit fictional man? How embarrassing.

Come over to the dark side… We have cookies and LOTHAIRE.