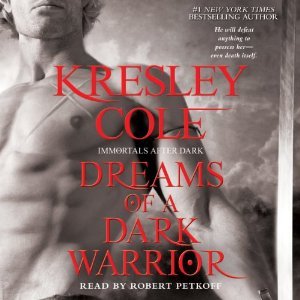 Murdered before he could wed Regin the Radiant, warlord Aidan the Fierce seeks his beloved through eternity, reborn again and again into new identities, yet with no memory of his past lives.

When Regin encounters Declan Chase, a brutal Celtic soldier, she recognizes her proud warlord reincarnated. But Declan takes her captive, intending retribution against all immortals—unaware that he belongs to their world.

TO SATE A DESIRE MORE POWERFUL THAN DEATH . . .

Yet every reincarnation comes with a price, for Aidan is doomed to die when he remembers his past. To save herself from Declan’s torments, will Regin rekindle memories of the passion they once shared—even if it means once again losing the only man she could ever love?


Immortals have been disappearing for several installments now, and in DREAMS OF A DARK WARRIOR we find out why, so it was nice to get closure to one of this series’ long running secondary threads. Regin has also been one of my favourite IMMORTALS AFTER DARK characters since I first made her acquaintance which made this book extra rewarding for me. Then, enter Lothaire the enigmatic (and sexy!) Enemy of Old, plus the interconnecting of several previous plots, and you have one happy listener!

I absolutely loved the premise; a Berserker warrior falls short of winning his 200th battle, and with it his chance at immortality, as a consequence he’s stuck in an endless reincarnation loop that triggers whenever his memories come flooding back upon reuniting with his soul mate. It’s tragic. It’s sappy. And, I just gobbled it up! Every rebirth brings one of Aidan’s original personality traits to the fore, and Declan Chase represents the worst of him. If you have a thing for damaged heroes, DREAMS OF A DARK WARRIOR is your stop.

Regin the Radiant has always been one of this series’ more vocal characters, and I thoroughly enjoyed watching her take center stage as this novel’s female protagonist. She has quite a mouth on her, so I was psyched that Kresley Cole didn’t hold back when it came to her dialogue. Her POV was a riot, but at the same time there was a touch of vulnerability to her as well that helped to ensure that there were as many feels as there were laughs which is equally imperative in Paranormal Romance.

Robert Petkoff’s narration was as impressive this tenth time around as it was the first. Chase has an Irish background, so he added yet another accent to his overflowing repertoire, and Lothaire’s Russian cadence was to die for. I’ve only had a tiny taste of what this particular vamp has to offer, but after sampling Petkoff’s rendition I want more! He also excelled at conveying Regin’s energy, and crazy antics, and his surfer dude reading of Thad was pretty gnarly too.

I want to marry DREAMS OF A DARK WARRIOR, and have audiobook babies.