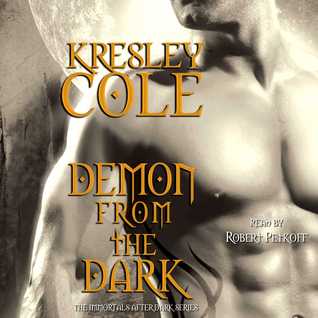 A DANGEROUS DEMON SHE CAN’T RESIST . . .

Malkom Slaine: tormented by his sordid past and racked by vampiric hungers, he’s pushed to the brink by the green-eyed beauty under his guard.

A MADDENING WITCH HE ACHES TO CLAIM . . .

Carrow Graie: hiding her own sorrows, she lives only for the next party or prank. Until she meets a tortured warrior worth saving.

TRAPPED TOGETHER IN A SAVAGE PRISON . . .

In order for Malkom and Carrow to survive, he must unleash both the demon and vampire inside him. When Malkom becomes the nightmare his own people feared, will he lose the woman he craves body and soul?


I’ve been on the hunt for more Lykae ever since Lachlain MacRieve, although I must admit that Kresley Cole’s vampires, demons, Valkyrie and witches have tested my loyalties a few times. This latest installment sure did push me to my limits, and Malkom was primarily to blame for that. His wounds were so fresh that I could smell the blood, and all I wanted to do was to play nurse, and kiss all of his ouchies. Plus, he’s a Vemon, and who doesn’t love two hunky supes for the price of one!? #AmIRight.

Every so often a paranormal couple will strike a chord with me, and Malkom & Carrow did just that. Both of them wore their emotions on their sleeves, and that was further amplified by this author’s stand-out writing style. The lead couple’s thoughts, and feelings radiated from the pages of this book, and I loved how they got from A to HEA, and everything in the middle. The chemistry between these two, even with a language barrier, was unbelievable.

The story meshed well with the main arc, and it’s been a while since Cole worked in a new type of paranormal, so that was gravy. There were some laugh-out-loud moments which was unexpected given that a good sized chunk of this novel takes place in Hell, and given the long list of crap that Malkom’s suffered through. Carrow fully discovered her power thanks to Slaine, and he found happiness, so that was some nice karma.

Robert Petkoff didn’t really need to do much to make this audiobook a 5-star listen; however his tantalizing accents, ability to let loose for any scene regardless of its nature, and just his knack for all things IMMORTALS AFTER DARK in general. Malkom’s vulnerability and Carrow’s devotion to Ruby came through loud and clear, and speaking of the seven year old witch, Petkoff can even narrate kids impeccably.

DEMON FROM THE DARK is definitely a book that I can see myself listening to again, and again.

16 responses to “Audiobook Review: Demon from the Dark by Kresley Cole (@kresleycole, @petkoff)”