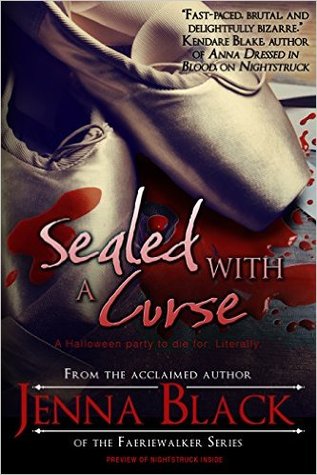 Being the new kid in town sucks, and when you're the only one not invited to the party of the year, you know you're a real outcast. So when Chloe discovers she's invited to the annual Halloween party after all, she throws together a costume and braves a hurricane to go. But there's more than weather threatening the fun, and unless she can find a way to counter the curse that's killing off the partygoers, it'll be the last party she or any of her classmates ever attend. Forget about trick or treats; tonight is going to be pure terror.

This is a short story that is a great Halloween read. It was a quick read, but it is filled with some thrilling scenes.

Chloe’s family can cast curses. Or at least that is what her mom keeps telling her. She is more of a skeptic. She has moved four time in four years. It is now her senior year and she is moving after school has started. She really feels like an outsider this year. All she wants is to be invited to the event of the year in the small town, Kim’s Halloween party. However, she hasn’t gotten an invite. Come to find out, her invite was delivered to the wrong house. So now she is scrambling to go to the party.

Kim’s Halloween party is a big deal in this little town every year. However, this year, there isn’t that many people that come. There is a hurricane headed in their direction. It was supposed to head back out to sea, but the storm is still pretty bad. Many people stay home. Chloe wasn’t going to pass up the chance to finally spend some time with her new school mates. That is until things start to go all wrong.

Chloe’s mom calls to say that her grandfather overheard them talking can cursed the party for not inviting his granddaughter. It starts off with the storm getting worse and the power and phones going out. Neither landlines or cellphones seem to be working. At this point, Chloe doesn’t even believe that there is a curse, but eventually, she has no choice but to believe.

I won’t go into any more of the details and spoil what all happens. Let’s just say that it gets quite hectic. Kim’s parents are at the party, but they are quickly dispatched to deal with one of the issues, which leaves the high school seniors to deal with all the weirdness on their own. They all have to make some hard choices. Aaron, one of the boys that starts off a quite the jerks, really steps up in the end and helps Chloe through some tough things. I ended up liking him in the end.

I enjoyed this as a quick Halloween read going into the season. If you’re looking for a Halloween read, this is an enjoyable read. *I keep wanting to use the word “fun”, but that really doesn’t describe a horror book very well does it? Maybe “thrilling” is the word I’m looking for.

22 responses to “Review: Sealed with a Curse by Jenna Black (@mlsimmons, @jennablack)”