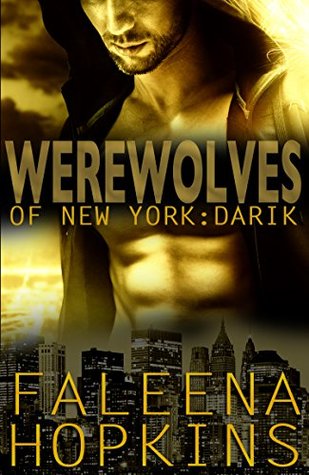 Darik Greyson was born merely human. His ancestor's DNA carries no wolf blood. But something horribly painful happened to him that ignited a spark in his soul at the age of thirteen, and his wolf was born...created from tragedy. Now that he's twenty-eight and part of a pack, he keeps having these dreams - nightmares, more like it - that tell him something is coming. Why does he feel a test is on the way... and if he doesn't pass he'll lose the woman whose face is never more than a blur.

Talia Irizarry works the nightshift at Manhattan General. She's a nurse, and a good one. But the men in New York seem to prefer eighteen year old actresses and models over real women, and she's not holding her hopes high that this loneliness will ever abate. Seeking solace in a much needed vat of ice cream, she walks to the nearest bodega (a small, local grocery store) to buy one. What she finds is two gunmen with other plans.

A Stand-Alone Series, each wolf in the pack gets his own book. "Werewolves of New York" - Nathaniel, Eli, Darik and Dontae. Can be read out of order, but written in this chronological order.

Recently I came across this book and realized it was from an author that I had read and enjoyed before. That book was about vampires, and when I saw werewolves for this one, I knew I had to read it. Besides, the cover would have sold me regardless! One thing did give me pause and that was that this was book 3 in the series, but then I found out that each book can standalone with no cliffhangers-although they do feature the same characters.

Darik has been having the same dream over and over. He is in a bodega and he knows he has to save a woman from being shot by robbers-but he never sees her face. It makes for some pretty bad nightmares. Otherwise, he is a rich, handsome, and an architect, who also just happens to be a werewolf. He’s a rare werewolf, one that changed, after a horrible tragedy when he was just thirteen. He found his pack back then, and has been with them ever since. There are four of them, and they all are architects with their own firm. Talia is a nurse that loves her job. She is single, and her closest friend is a co-worker, Jonas-who takes her to the gay bars where he hangs out. Not a good way for her to ever meet the man of her dreams. One night she goes to the bodega just as it gets robbed. And you know where this is going…

There’s a lot to like about this story. Of course it’s insta-love, but then with werewolves, it usually is. And I forgive it when it involves werewolves. The characters made this book for me over and beyond the romance. Darik and his fellow werewolves share a camaraderie filled with snark, along with their werewolf bond. Darik’s backstory was intriguing-how can he be a werewolf without werewolf DNA? It was a different kind of premise. I would have liked that to have been explored perhaps a bit more though. But of course, the romance was the center of this story. Talia was a good character as well. She finds herself in the middle of an intense situation and is a real trooper. I think it would have been more believable if she had been a bit more freaked out about werewolves existing, but that kind of goes with the territory of most paranormal romances. In the end I didn’t have a problem with it.

As I said, I did enjoy the characters and the romance. I was entertained enough that I plan to go back and read the other three books that come before and after this one. I don’t think the book was ruined by not reading the other books first, however. Not at all. I am particularly interested to read Dontae’s story, which is book four. He was the one that has no interest in ever meeting his mate-and has an attitude about it. That should be interesting!

I recommend this to adult paranormal romance readers-adult due to some pretty sensual scenes.