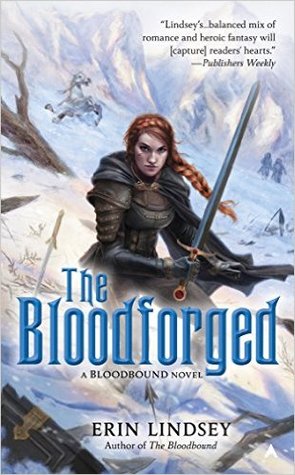 The epic saga that started in The Bloodbound continues…

As war between Alden and Oridia intensifies, King Erik must defend his kingdom from treachery and enemies on all sides—but the greatest danger lurks closer to home…

When the war began, Lady Alix Black played a minor role, scouting at the edge of the king’s retinue in relative anonymity. Though she’s once again facing an attacking Oridian force determined to destroy all she holds dear, she is now bodyguard to the king and wife to the prince.

Still, she is unprepared for what the revival of the war will mean. Erik is willing to take drastic measures to defend his domain, even if it means sending Prince Liam into a deadly web of intrigue and traveling into the perilous wild lands of Harram himself.

Only the biggest threat to the kingdom might be one that neither Alix nor Erik could have imagined, or prepared for…


The first thing I want to say is that—overall—THE BLOODFORGED by Erin Lindsey was a great book.

It fully held my attention, I loved learning more about about the newly introduced cultures, I bloody loved Rig’s chapters, and I can’t wait to see what develops with Wraith and the rebels.

BUT. I have two issues.

I hate cheating. HATE. One of the main reasons I shy away from contemporary romance is b/c you’re much more likely to come across it there than you are in a book not completely focused true love, blah, whatever.

Still . . . It creeps up sometimes, mostly in the form of a home-wrecker, and even if no actual cheating occurs, I loathe the tension created by the fear and doubt and insecurity.

In the end, nothing significant happens here. A woman has a crush on her married commanding officer (who is appallingly and hilariously oblivious).

My real issue is the lack of resolution. Lindsey made us watch as the newlyweds were separated. Made us watch as not-his-wife started braiding her hair in imitation of Wife. Made us suffer through ambiguous dialogue . . .

Then nothing. There’s no confrontation, it’s never addressed, it’s just left hanging there like a storm cloud threatening to unleash on our heads.

Then there’s the bigger issue . . . It doesn’t happen until the last 5%, but suffice it to say that a situation arises that I found to be both generic and convoluted. No, I can’t tell you what it is, but it’s entirely possible that I’m a minority here—I gave Plot Twist to my sister and bff (both avid readers) as a hypothetical, and Sister didn’t see what the big deal was, and BFF wasn’t crazy about it, but didn’t hate it either.

It’s unfortunate that THE BLOODFORGED ended with what was my only real problem, b/c fair or not it casts a pall over the rest of the book that I ultimately enjoyed.

And I really did enjoy it. Mid-book I consciously recognized how impressive it was to increase the number of POVs in a book this short and still keep it flowing so well, and Liam’s personal growth was especially compelling in a sea of excellent character development.

There was the witty banter I loved from the first book. The sense of urgency brought on by war had me dashing through the pages. Oh, oh! And there’s an index/glossary in the back so I was no longer banging my head against a wall trying to figure out the Nine Virtues. ALSO, did I mention Rig? B/c Rig was friggin’ amazing.

If it wasn’t for end-of-book Plot Twist, THE BLOODFORGED by Erin Lindsey would have easily been a 4.0 – 4.5 star read, and I’ll definitely read the next book. SO. Recommended with the slightest of qualifications.