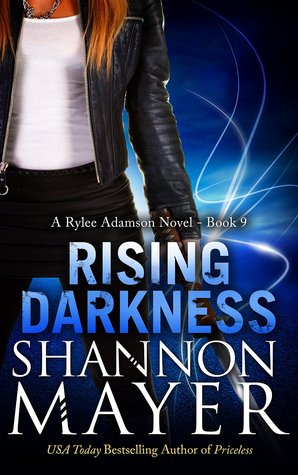 “My name is Rylee and I am a Tracker.”

When children go missing, and the Humans have no leads, I’m the one they call. I am their last hope in bringing home the lost ones. I salvage what they cannot.

One last salvage and the final battle with Orion and the demon hordes will be upon me. I don't know the name of the person I'm Tracking, or what she looks like so finding her is going to be . . . impossible. But she is the key to defeating the demons.

The world has been swept with a plague that is killing not only the humans, but every supernatural it touches. While I’m out Tracking, my allies are being wiped out.

Worse than all of this? I am losing Pamela to the darkness with every second that passes.

I'm not sure even I can control any of these outcomes

But that doesn't mean I'm not going to try.

There’s an author note at the beginning of this book that strongly encourages readers to check-out the novella, STITCHED, prior to diving in, and after personally having done so I’d like to reinforce how important that 100 page tale is towards understanding RISING DARKNESS. Also, if you’ve been considering giving THE ELEMENTAL spin-off novels a whirl as I have, this installment will definitely convince you. So, you’ve been warned, by downloading this title you’re basically adding a minimum of one short and another series to your TBR pile.

WOUNDED was devastating on the Rylee / Liam front; however a ray of hope did peek through the clouds in #8.5 which was further explored in this volume. Mayer did manage to circumvent two of my Speculative Fiction deal breakers (i.e. dead peeps stay dead & no ghost HEAs), but the outcome was WEIRD to say the least, and with only one book left to go the romantic thread will either be a train wreck or a stroke of genius.

I mentioned in my previous review how much I enjoyed Pam’s POV, and that carried over to this novel; I thought that the author captured her internal struggle exquisitely, and in such a way that it wasn’t damaging to her character, unlike her approach to Milly. Also, the aftershocks that stemmed from Pam’s final side choice in the coming battle made for some interesting offshoots including Elemental correlations, and Alex. Oh. My. God. ALEX!

The plot line was another winner with Rylee’s search for the Great Wolf followed by that of the Destroyer. Again, Mayer blew my expectations out of the water by revealing surprising connections with some of this series’ cast as well as previously visited locations and past events. And, of course no RYLEE ADAMSON installment would be complete without the death of a secondary. Up until this point I’ve been unaffected by all except one, but I was saddened by this latest casualty.

My binge read has officially come to an end with RISING DARKNESS, and now I must wait for BLOOD OF THE LOST. Gah!