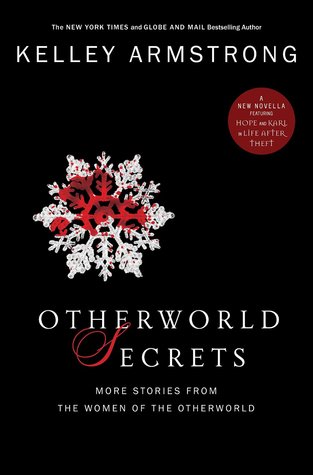 For fans of Kelley Armstrong's beloved, bestselling series, an exciting collection of novellas and stories, both original and chosen by the author, featuring her Otherworld characters in heart-stopping, pulse-racing action.

Globe and Mail and New York Times bestselling author Kelley Armstrong captivated readers with her thirteen-novel Women of the Otherworld series of supernatural thrillers. Though the series is over, her characters live on, not only for her fans but for Kelley herself. In this new collection of deeply enjoyable, compulsively readable novellas and short stories, she throws her wonderful characters deep into tricky situations that test not only their ability to safely navigate danger but also their relationships with each other.

On top of these treats, she also offers her readers a terrific, brand-new novella featuring Karl and Hope, on what just may be Karl's last heist.

LIFE AFTER THEFT – 4.5/5
One of the things that sets Kelley Armstrong’s OTHERWORLD stories apart is that she doesn’t only tell the “good” characters’ tales. The leads in this short were Hope Adams who happens to be an Expisco Half Demon and Lucifer’s daughter, and Karl Marsten, professional jewel thief extraordinaire and lifelong thorn in the Pack’s side. This was an entertaining read about one crook trying to con another (take a guess as to who comes out on top), and the protagonists’ struggle to be role models for their children when they both thrive on chaos.

FORBIDDEN – 5/5
This was a twisted novella that’ll leave you questioning who the real monsters are, and a great opportunity to learn about how Morgan joined the Pack. The author kept me in suspense, as she so often does, right up until the end about who the culprits were, and following Elena & Clay’s investigations just so happens to be one of my favourite pass times. I loved the brief look at Michaels’ challenges as Alpha-elect, and the mixture of werewolf / witch lore, and ritualistic magic.

ANGELIC – 4/5
Another story featuring the darker side of this author’s universe with Eve Levine and Kristof Nast as the stars. Savannah’s mom somehow got roped into doing the Fates’ dirty work in her afterlife, and this tale revolved around one of her missions. This was the first, and only appearance made by the Djinn in this series, so that was pretty cool, and I enjoyed watching Eve manipulate angels and demons alike. She’s such an awesome character to tag along with because she has zero qualms about being evil, and winning by any means necessary.

ZEN AND THE ART OF VAMPIRISM – 4/5
I had a decent idea where the plot was headed from the get-go, but you never know with Armstrong, so I didn’t count my chickens before they hatched. Zoe Takano is a secondary that plays a very minor role in the WOTO series, and pops up in a number of shorts, however little is known about her. This was a cute novella about two vampires trying to take over her home turf, and her non-violent way of getting them to think twice about their decision. The various Toronto landmarks that were highlighted during her guided tour of the city were a nice bonus too.

THE UNGRATEFUL DEAD – 4/5
Two entitled rich kids die in a car accident, and adopt the same snooty attitude as ghosts thinking that all necromancers must serve them. They bit off more than they could chew with one medium, and were then forced to seek out Jaime Vegas for help, only their definition of assistance was somewhat skewed, and they ended up getting exactly what they deserved. I liked how the protagonist tried to do the right thing until she realized why the other necro did what he did, and showed them why it’s important to stay on a Spiritualist’s good side.

COUNTERFEIT MAGIC – 3/5
Lucas & Paige remain at the bottom of the WOTO totem pole for me; don’t ask me why because I honestly don’t know. They are the straight arrows of this world which makes them stand-out like sore thumbs in a series where all of the other characters walk the line between light & dark. They’ve been married for eight years now, and this tale created unnecessary drama in their relationship in the form of potential infidelity. We did get some Savannah / Adam action in this one though, and the classic Cortez-Winterbourne investigation as well which saved it.