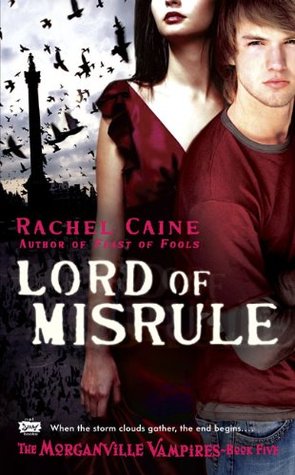 In the college town of Morganville, vampires and humans coexist in (relatively) bloodless harmony. Then comes Bishop, the master vampire who threatens to abolish all order, revive the forces of the evil dead, and let chaos rule. But Bishop isn’t the only threat.

Violent black cyclone clouds hover, promising a storm of devastating proportions as student Claire Danvers and her friends prepare to defend Morganville against elements both natural and unnatural.

Fifth in Rachel Caine’s Morganville Vampire Series, this book continues the saga of Claire, her boyfriend Shane, and roommates Michael and Eve, as they fight to stay alive in a town where vampires rule and human’s are either prey or protected by the vampires. Taxes in this town are not paid in money, but rather in blood. The busiest place in town is the blood bank, aside from the college. College students are mostly kept in the dark, where Claire should have stayed, but since that didn’t happen, Claire is now a fixture in the middle of vampire politics, along with life or death moments at every turn. She also now belongs to Amelie, the leader of the vampires and founder of the town. She’s also one of my favorite female characters that I have ever read-but of course that list is pretty long! If you are planning on reading this series, there may be a few spoilers ahead.

Now that Bishop(Amelie’s father)has staged his big coup at the feast in the previous book, he now rules the town. Or at least thinks he does. The town is literally on fire in many places and Glass House, where Claire, Shane, Michael and Eve live, is smack in the center of all the action. Even Monica, queen bee of the mean girls, is there, and that’s saying a lot after all the stunts she has pulled against Claire. She’s the kind of character that it wouldn’t bother you if something bad happened to, pretty much the same if something bad happened to Bishop, who is just plain evil. By the same token, Monica’s brother Richard is the nice guy policeman that has been exceptionally good to Claire and her friends.

Even though this is a story about vampires and the human inhabitants of the town of Morganville, it is also pretty much a story of good versus evil-or shades of somewhere in between. There are truly evil vamps, but at the same time there are some good ones as well. And some that fall somewhere in between. The problem is that with their great age, there also comes a cunningness that can hide great evil at times. Or the fact that all the vampires are sick and are well on their way to insanity. Amelie is the only vampire that knows how to make a vampire, for good reason, and there is a book that explains the process. It was missing, but Claire found it, and now Bishop is determined to obtain it. Vampires start taking sides and some do go over to the dark side(Bishops). There’s never a dull moment this time around with way more than it’s share of action. Of course through it all Myrnin, the mad(literally)scientist that Claire works part time for, is in the middle of everything. He is a really fun character-except when he has his insane moments, and then he’s pretty scary. To make things even more interesting, the weather in Morganville is about to get really shook up, and not in a good way.

As with all of these books, I was completely caught up by this authors world. It might not have been my absolute favorite of all the books, but it is still better than a lot of other books out there. It’s kind of a direct continuance of the last book and the same story line continues on from this book into the next book. Unfortunately for people that hate cliffhangers, while not a horrendous one, this ending is going to make you want to buy the next book ASAP. Which of course is exactly what I did. As always with these reads, I highly recommend it!