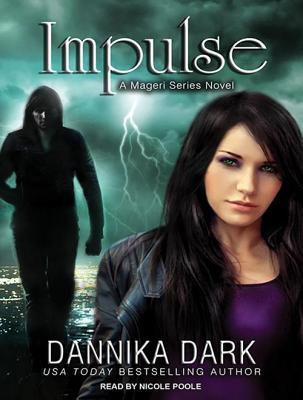 Almost one year ago, a Mage attacked Silver and changed the course of her destiny. Immortals exist, and now she is one of them.

Within the dark and supernatural city of Cognito, Silver is living under the watchful eye of her Ghuardian and dating her mortal enemy. Neither man can protect her from a dark secret, one buried within the contents of a box. As rival factions struggle to gain control, she finds herself in the middle of a centuries-old feud that threatens to drive a wedge between her and Logan Cross, the man who intends to seduce her.

In an explosive turn of events, one life is saved and another is forever altered. Can Silver trust those around her, or are they hiding a dark secret of their own?

Anything that Dannika Dark writes ends up as a favorite read of mine. That’s just a fact. Recently, I decided to listen to this one and ended up enjoying it just as much as when I read it almost three years ago.

Third in the Mageri Series, Impulse continues the story of Silver, a once human woman who was turned into a Mage against her will. She lives with her Ghuardian, Justus, in an underground home and is dating Logan, a chitah. Logan is not a shifter, rather he is a man with chitah instincts, speed, senses, and occasionally chitah markings and retractable fangs. While he isn’t immortal like Silver now is, he will still live hundreds of years. Besides being immortal, Silver is what is known as a Unique among other mages. She carries a strong(stronger than other mages) electrical charge inside her, is able to flash(move) to close by locations automatically, can pull metal implements to her if they have been touched by another mage recently, and possibly has more talents that she still doesn’t know about. There are so many other important characters in these reads and they have mostly all been fully realized by the author. In this read, Christian Poe, an Irish vampire, is introduced, and is now Silver’s personal guard due to Silver’s new position within the Mageri. Christian quickly becomes very important to this story, as well as the rest of the series. Also introduced is Page, a Relic, otherwise known as a breed doctor. All of the different characters belong to the Breed world.

This read features a deadly assassin attack on a major event, and even an attack on a main character that comes way too close to death. The villains include a deadly chitah, a member of the Breed counsel, and as with all of these books, Nero, Silver’s nemesis from the very first book titled, Sterling. Whether he is front and center or doing nefarious things in the background, Nero is probably the worse villain of these books, although there is another one that rivals him. In addition, we find out a lot more about Justus, and why he is the enigmatic man he is. There’s also an interesting backstory concerning how Silver was made in a lab before her birth, and explains a lot about her mother’s lack of love towards her.

Over and above all else, to me the best part of these books is the relationship between Silver and Logan. Logan is on my top two? three? favorite male hero’s list, as he is just the best when it comes to romance. I don’t know how else to describe it-if you read these books, you know what I mean. His feelings and actions towards Silver are nothing short of amazing, and the chemistry between him and Silver is off the charts.

I thoroughly enjoyed the narration by Nicole Poole. I have listened to her on this series, as well as Darks’ Seven Series, and I have especially liked her male voices. Sometimes a female narrator doesn’t do as well with male voices, but Ms. Poole handles them with ease. In particular, her Christian Poe’s Irish accent and Simon’s(another mage and good friend to Silver)English accent are spot on. Her narration made me feel I was part of the action, and that is all you really need when listening to a good story.

Even if you don’t enjoy listening to books, I still wholeheartedly recommend this book and series to adult urban fantasy readers, and because it’s such a good romance, to paranormal romance fans as well. I would strongly suggest you start with the first book, Sterling, keeping in mind that Logan doesn’t enter the series until the second book, titled Twist.