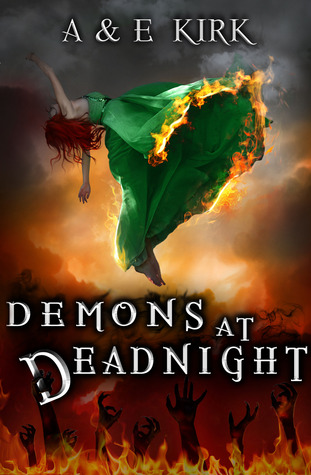 For seventeen-year-old Aurora Lahey, survival is a lifestyle.

DEMONIC DESTINY
Aurora has the crappiest superpower on the planet. And it's just unleashed a hit squad from hell. Demons are on the hunt, salivating to carve her carcass into confetti.

CHARISMATIC KILLERS
The Hex Boys--mysterious, hunky, and notorious for their trails of destruction--have the answers Aurora needs to survive. But their overload of deadly secrets and suspicious motives makes trusting them a potentially fatal move.

LETHAL ALLIES
The battle to save her family, herself, and stop demonic domination may cost Aurora everything worth living for, and force her to reveal her own dark secrets. But no worries. She needs the Hex Boys to pull this off, and, chances are, teaming up with these guys will get her killed anyway.

This is one of those books, the ones that you know the minute you start them that you are going both love, and not be able to put down. Thanks to Melissa at Books and Things, for the recommendation. Demons have never been a favorite paranormal premise for me, but this one is not to be missed.

This read starts out with a bang and never lets up-well except for some romance and snarky moments. Aurora sees demons, and has no idea why. She’s seventeen and has recently moved back to a town she lived in as a child. Moved, due to her being attacked and almost killed, so her parents want her to feel safer. She comes from a happy and close knit family of seven, a family that has no idea what is up with Aurora. She doesn’t tell them due to being afraid of being put in an asylum. And that’s because this town is infested with demons and they are all out to kill her-and who would believe her? When she meets Ayden and Tristan, two gorgeous guys around her age, after fighting off a particularly scary demon, her life completely changes. They have four friends, Blake, Logan, Mathias, and Jayden(twin to Ayden). Each guy has his own separate power to fight demons and they all start protecting Aurora-well Mathias is a bit late to that, as he and Aurora do not get along. They don’t understand why Aurora is being singled out. After overhearing some demon hunter conversations and hearing herself called by another name by the demons, Aurora figures it out. She is something that the guys are all supposed to be looking for, to hand over to the agency they work for. An agency that has no intentions of ever letting the her go. Aurora has no intentions of that happening, so she’s not telling anyone-least of all the boys.

This story is told in the first person, and for me it really worked. Aurora’s snarky mind was hilarious and kept me either smiling or laughing right out loud. The guys, otherwise known in town as the Hex Boys, were all fully realized by the author. I appreciated that, because sometimes a group of characters can be interchangeable and I can’t keep them straight, but these boys each have a personality that won’t quit. Ayden in particular, and he and Aurora pretty much are a “thing” although Aurora isn’t at all sure if it’s not a pretend girlfriend thing-which is what their cover story is for spending so much time together. That being said, their chemistry together is pretty much off the charts, keeping in mind that this is a young adult read.

I started looking for quotes to include because the banter is so fun and Aurora’s mind is so snarky-especially about her own actions-but I realized that you can look pretty much on any page and find something funny. That’s a rare book in the urban fantasy world that you can say that about. Sure some are really fun reads and have their funny(and snarky) moments, but this one ups that at least a notch, at least it did for me.

In the end, I decided that this series is going on my list of all around great urban fantasy for young adults-not that I have one-but if I did, it would be there. Lots of action, romance, great characters, and it all came together in a wonderful read. I would highly recommend this to young adults ages 15+, adults that enjoy urban fantasy, and even to young adult paranormal romance fans who will find a lot to like about this read as well.