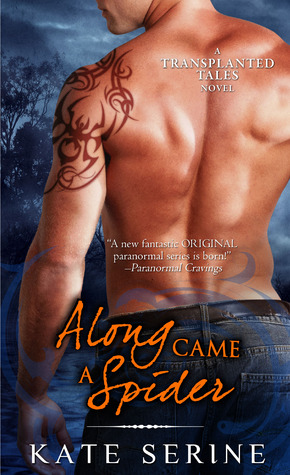 Along came a spider…

When Trish Muffet is attacked at a grisly crime scene, the last person she expects to come to her rescue is Nicky “Little Boy” Blue. But since walking away from everything two years before, Nicky’s been doling out vigilante justice as “The Spider,” taking on the vicious predators of the night in hopes it’ll lead him to his ultimate target – Vlad Dracula. And he needs Trish’s help.

Although Nicky’s renegade style goes against everything Trish stands for, she’ll do what she must to bring Dracula down. With danger stalking her, Trish knows the only person she can count on is the one man who has the power to leave her breathless. There’s no way she’s letting this spider frighten her away…

This is the third installment of the Transplanted Tales series. It is a world where fairy tales and other literary characters have been transplanted into the real world. Think of the TV show, Once Upon a Time. Outside of that basic idea, the stories are completely different, including how they are brought into this world of Here & Now.

In this book, we follow Beatrice ‘Trish’ Muffet, of Little Miss Muffet fame, she is also the head of Forensics for Fairytale Management Agency or FMA. She has been a pretty large secondary character in the first two books, as she helps to figure out the crime scenes. She has a unique ability to read the dead, which really helps her do her job.

There is also Nicky Blue, of Little Boy Blue fame. He has been a much smaller secondary character. He came across from the land of Make Believe at the same time as Trish, but they took two different paths. Nicky as quite the reputation and criminal past. He has also be MIA lately. That is until Trish sees him lurking in the shadows and chasing down vampires. It seems that Nicky Blue has been trying to track down Dracula. Yep, that Dracula.

In this story, we have Red, Little Red Riding Hood, and Grimm, the Grim Reaper, (from the first book Red) working with Trish to help solve some murders. There are psychotic vampires running around killing people. There is also trafficking of illegal pixie dust. Ordinary cops, people like you and me, trying to muscle in on the Tales turf. Al Addin, the leader of FMA, is trying to play nice with the ordinary cops, which is driving the rest of them crazy. Nicky is trying to keep Trish safe.

This book has a lot humor and action. I think it might have the most action of all the books so far. We also get to spend more time with the hero of the next book, Gideon. We met him in the previous book, but we really get to see more of him in this book. While you could read this book as a stand alone, I don’t think I would recommend it. There is just too much that I think you might miss with the overall story arc. Also, the majority of the world building is in the first book, so you are someone expected to know some of the stuff going into the future books. I think you could figure it out, but wouldn’t enjoy it as much.

10 responses to “Review: Along Came a Spider by Kate SeRine (@mlsimmons, @KateSeRine)”