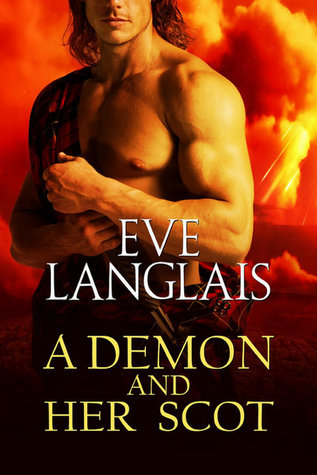 An unlikely duo, the golfing match from Hell, and a devil determined to win, even if he has to cheat. Lucifer’s up to his matchmaking mischief again in this fast-paced, humorous jaunt into the bowels of the pit. Think you can handle the heat?

“Fetch me a Scot,” Lucifer commands. Sounds simple, except the skirt-wearing jerk won’t cooperate. But Aella isn’t one to give up. Willing or not, she delivers her target to the Lord of Sin. In retaliation, the much-too-sexy Scot has Aella assigned as his bodyguard for the golfing match from Hell.

One shot ruined Niall’s life. A second shot could help him regain it. Niall sold his soul once to win a lady’s heart only to end up betrayed. Does he dare take a risk and give love a second chance?

I decided that since it was Halloween, I should take a break from my other Eve Langlais series and go back to the Welcome to Hell series. I mean, what is more Halloween that Lucifer, demons and vampires. Add to that the hilarity and smexy times and you have yourself a great Halloween read, though, to be fair, I would’ve read this book any time of the year. Also, there is a new book in this series coming out and that reminded me that I should get back to this series.

Lucifer and his brother, God, have a golf match coming up. Lucifer is determined to win. He has finally comes to the conclusion that he needs help with his golf game. Even cheating, he won’t be able to win this game. Luckily, he owns the sole of the best golfer ever. Unluckily, that golfer, Niall, has sworn off golfing.

Aella is one of Lucifer’s minions. She was turned into a demon after she slept with the wrong greek god who happened to be married. His wife took exception and turned Aella, even though she had no idea he was married or who he was at the time.

Both of these two were wronged in their mortal lives and are now forced to live in Hell. The difference is that Aella has made the best of her life. She has a job working for Lucifer. She has friends. They even sing karaoke in a bar in one of the circles of Hell. Niall sits in a bar in the worst circle of Hell and drinks away his depression. It has been centuries and he still hasn’t gotten over it.

Boo-fucking-hoo. I was queen until I was wronged too. Do you see me acting all depressed? Fuck no. I had a temper tantrum, killed a few things and got on with my life.

Overall, I enjoyed this story. I liked Aella. I thought she was a very strong woman. She was wronged and should never have been forced to live her life in Hell, but she is making the best of it. Niall, I wasn’t much of a fan. He sold his soul to Lucifer to be the best golfer in the world so that he could win the golf match and win the woman. When he finds out she doesn’t want him and cheats on him even before they’re married, he becomes a mopey drunk. Not my type of guy. Lucifer was as hilarious as ever. I’m excited to see the next book in the series.

16 responses to “Review: A Demon and Her Scot by Eve Langlais (@mlsimmons, @EveLanglais)”