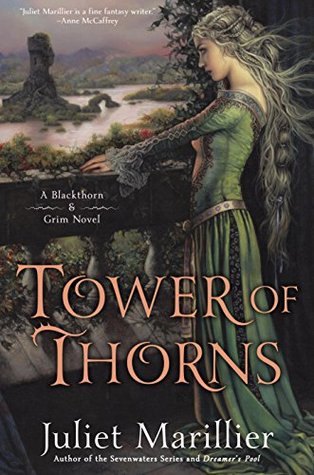 Disillusioned healer Blackthorn and her companion, Grim, have settled in Dalriada to wait out the seven years of Blackthorn’s bond to her fey mentor, hoping to avoid any dire challenges. But trouble has a way of seeking out Blackthorn and Grim.

Lady Geiléis, a noblewoman from the northern border, has asked for the prince of Dalriada’s help in expelling a howling creature from an old tower on her land—one surrounded by an impenetrable hedge of thorns. Casting a blight over the entire district, and impossible to drive out by ordinary means, it threatens both the safety and the sanity of all who live nearby. With no ready solutions to offer, the prince consults Blackthorn and Grim.

As Blackthorn and Grim begin to put the pieces of this puzzle together, it’s apparent that a powerful adversary is working behind the scenes. Their quest is about to become a life and death struggle—a conflict in which even the closest of friends can find themselves on opposite sides.


Last year in DREAMER’S POOL we met Blackthorn and Grim, who quickly became two of my new favorite characters.

They are both wonderfully horribly broken, but that mutual brokenness is what made them so compatible.

As friends, as cohorts, as travel companions.

Blackthorn, fueled by her implacable hatred of the man who took everything from her, quickly stole the spotlight—not only is she a healer, a position regarded with respect, she is the more forthright of the two. She may be surly and taciturn, but if something needs to be said, Blackthorn is the one one to say it.

Grim was the strong back for lifting heavy objects. He took odd jobs, performing manual labor for various townspeople, and when he spoke, he used as few words as possible.

Obviously, there was more to him than that, but he was inarguably the Robin to Blackthorn’s Batman.

And he’s perfectly happy there. Or as happy as a man like him is capable of being happy.

This time around, Grim, still silent, still steady, burrowed so deeply into my heart that he’s still there, months after I first read this book.

I can’t think of him without a corresponding ache.

Marillier so brilliantly captured his patience, his selflessness, his calm acceptance of his perceived lack of any real usefulness, and his belief that one day—it’s only a matter of time—Blackthorn will get tired of him, and send him on his way, worthless sod that he is.

It hurts. Ye gods, it hurts.

But it hurts the way it hurts to look at Chihuly glass in the sunlight or heathered fields in Virginia. It hurts b/c it’s so damn beautiful.

In TOWER OF THORNS, Blackthorn and Grim are once more thrust into the strangeness that goes hand-in-hand with fey creatures and magic.

A woman has come to court begging Prince Oran for assistance. Her land and her people are plagued by a creature in a tower. It howls in agony from sunup to sundown every single day. The tower is surrounded by a hedge of impenetrable thorns, and all attempts to get through them result in injury and death.

Marillier spins her story so deftly that you wonder if you’ve heard it before. But no, it’s not possible—you have no idea what’s going to happen, and yet . . . it feels so familiar.

B/c it is the quintessential fairy tale. There are secrets and selfishness, harsh truths and consequences. But there is also peace and forgiveness and a path out of the shadows onto a sunlit road.

You only have to step out of the darkness.

TOWER OF THORNS by Juliet Mariller is bloody fantastic. As much as I loved DREAMER’S POOL—and I did love it—this second installment of BLACKTHORN AND GRIM has taken up residence inside me, it’s now part of me, and I will make a nuisance of myself, pushing it on everyone b/c you NEED to experience it for yourself.

Tied with Uprooted by Naomi Novik for my favorite book of 2015.

6 responses to “Review: Tower of Thorns by Juliet Marillier (@jessicadhaluska)”