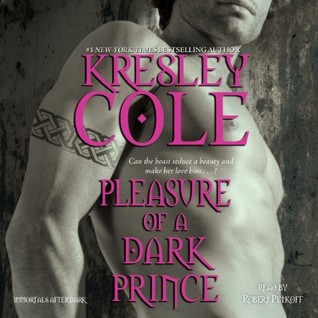 Lucia the Huntress: as mysterious as she is exquisite, she harbors secrets that threaten to destroy her -- and those she loves.

Garreth MacRieve, Prince of the Lykae: the brutal Highland warrior who burns to finally claim this maddeningly sensual creature as his own.

THAT LEAD TO A PLEASURE SO WICKED....

From the shadows, Garreth has long watched over Lucia. Now, the only way to keep the proud huntress safe from harm is to convince her to accept him as her guardian. To do this, Garreth will ruthlessly exploit Lucia's greatest weakness -- her wanton desire for him.

After listening to this installment, I now realize why the last few titles have made me cranky. It’s because I’ve been waiting for Garreth’s story since book 1, and the delay finally caught up with me. This series came highly recommended on account of its “sexy Scottish werewolves”, but they’ve been mostly MIA since WICKED DEEDS ON A WINTER’S NIGHT, so the younger MacRieve’s romance was long overdue. All is right with the world again.

In PLEASURE OF A DARK PRINCE readers get answers to many long running questions which was perfect timing as far as I was concerned because it revived my interest in the IMMORTALS AFTER DARK series. This book covers from pre-A HUNGER LIKE NO OTHER, to Garreth’s year long pursuit of Lucia, so it was an excellent overview of where Kresley Cole has been, and her intended direction going forward, although I’m quite positive that Nix will have the last word.

Valkyries and I haven’t exactly seen eye-to-eye in the past; however I’m slowly coming around to this author’s version. Lucia stood out because of her born-again-virginity—the celibate immortal queen should be discarded from IAD’s deck, just saying—and her reputation as The Archer. Garreth was awesome, and I loved the advice that his brother and Bowen kept giving him. They’ve both claimed their mates which gave them unique (amusing) perspectives.

Just when I thought that I had gotten my legs back under me (Robert Petkoff’s narration will do that to you), he goes and whips out a… Texan accent! Oh, and don’t forget that his brogue was also widespread with MacRieve as the male protagonist. This installment reminded me of the earlier IAD audiobooks, the ones that I chain listened to in under a month, so I’m taking it as a sign that a second likewise spree might be around the corner.

PLEASURE OF A DARK PRINCE was the werewolf that I was looking for.