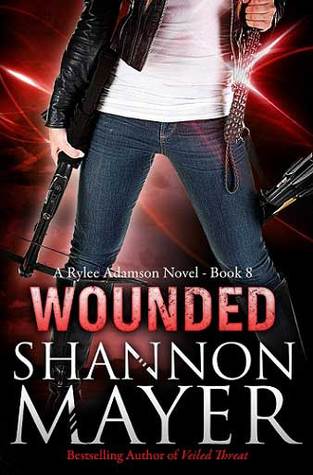 The clock is ticking and I can feel the weight of the final battle with the demon hordes looming over my head. The puzzle pieces are becoming clearer, but the casualty list is growing. And with each name that is added to those we've lost, my confidence cracks a little more.

Yet there is hope.

In my last review I complained that this series lacked feels. I really should have put two-and-two together, and realized that Shannon Mayer was saving the heart shredding for WOUNDED because the title says it all. The first paragraphs tally up the ally / RIP count thus far, and the numbers are pretty significant on both sides; one tombstone was missing though, and even though the author has been trying to mentally prepare us for several installments now, I was still ill-equipped for the prophecy’s next victim.

This novel was told from three different POVs: Rylee, Liam & Pam’s. The two former weren’t anything new, but the latter has been more of a side character up until this point, so I enjoyed gaining more perspective on the young witch. Pam had her own demons to fight in this volume as Giselle’s prediction was realized on top of the hoards that are wrecking havoc on Earth preparing the way for the Four Horsemen, and Orion.

I thought that the trap the black covens set for Adamson was overkill with India, Kyle, Simon & her adoptive parents as bait. The protagonist has more than proven her willingness to risk her life for her family, and especially children, that the pentagon lure belittled this book’s villains by making them seem somewhat incompetent. Nevertheless, the good vs. evil skirmish was fitting for an eighth installment.

Ok, so on to the elephant in the room. Mayer hasn’t exactly been shy about slitting throats in this series, but it’s one thing to off minor players, and quite another to take out a linchpin. Plus, it didn’t go down AT ALL like I had expected. Yes, the basics ensured that the prophecy was fulfilled; however the means, method, and reasons were show stoppers. I read STITCHED, the novella, immediately afterward, and there may still be hope.

Nothing can prepare you for WOUNDED, except maybe a stiff drink, so bottoms up!