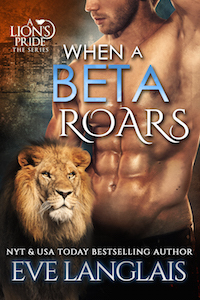 How degrading. Stuck babysitting a woman because his alpha said so. As Pride Beta, he has better things to do with his time, like washing his impressive mane, hunting down thugs for fun, and chasing tail—sometimes his own if his lion is feeling playful.

But his babysitting job takes an unexpected turn when the woman he’s assigned guard duty over turns out to be his mate.

A female threatened by an outside wolf pack.

A woman he wants to call his own.

A mate who doesn’t fall for his charm.

Usually Beta’s leave the roaring to the Pride’s alpha, but in this case given his level of frustration, he might have to make an exception. And if anyone doesn’t like it, they can kiss his furry tail.
Rawr!

Eve Langlais does it again with When a Beta Roars. This book starts pretty much where When an Alpha Purrs ends. The pride Beta has been give the job of babysitting the wolf alpha’s sister who is running from her old pack after leaving an abusive relationship. This is not the job he is looking for, but his alpha insists to help with the alliance between the pride and the pack. That is until he meets the woman he is babysitting. She is his fated mate.

Arabella is being seeked by her old back. Everyone wants to mate with her. Not because they like her, no. They want to mate with her because she inherited the wealth of her jerk of a dead husband and whoever she takes as a mate will also get the title of alpha of the pack. Arabella has been so badly abused by her previous husband, her wolf has abandoned her, she can’t shift.

One thing I loved about this series, the lioness are treated as equals and are valued members of the pride. The women of the pack, this is not the case. The lioness work really hard to help Arabella to get her confidence back. Hayder too wants to see a woman with strength, not cowed.

Even with the tough topics of abuse, there is still the humor that I’ve come to associate with Eve Langlais. Things like a wolf being allergic to a lion. The lionesses continue to be the biggest comic relief in the series. Lastly, Leo, the Omega and enforcer, is a great character. I can’t wait to get to his story. I once again highly recommend this story for people who enjoy shifter stories with a lot of laughter. This can be read as a stand alone, even though it is part of the series.

24 responses to “Review: When a Beta Roars by Eve Langlais (@mlsimmons, @EveLanglais)”