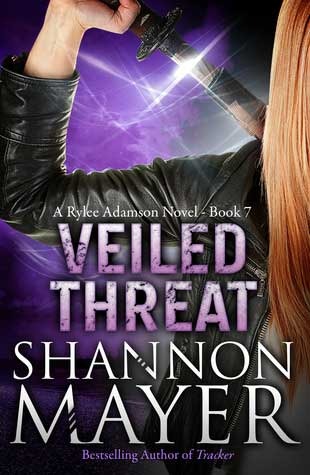 Demons are putting rips in the veil in order to cross over and steal my friends and allies away.

But, going after them isn't even close to simple. The deepest level of the veil is not a place you can just open a doorway too, after all, and of course, that's where they've been taken.

As fate would have it, it looks like I might get some help from a trained demon slayer and his fire breathing ride.

The only problem? Said demon slayer claims to have family ties to me. And I've never trusted my family.


My thoughts on this series were originally all over the map, but after two strong back-to-back installments I’m no longer waffling. There were some parts of VEILED THREAT that chafed, namely Erik & Ophelia, not the characters themselves just their acquisition and I know that I’m beginning to sound like a broken record because Shannon Mayer increases the RYLEE ADAMSON secondary count by at least one per book however it still irritates me. Anyway, the answers and groundwork that this novel brought far exceeded my personal annoyances, so it’s all good.

Crumbs about the Blood of the Lost have been dropped throughout the world-building; however this volume ripped that particular riddle wide open, and caused all that came before it to make a whole lot more sense. Erik & Ophelia played a huge role in that, so their presence was justified even though their ties to Rylee should have in all likelihood been broached in previous installments. I also had a knee-jerk reaction to the “figure eight” scene thinking it was too opportune, but I bit my tongue, and the author went in a different direction with it which worked out.

The plot development with regards to Milly wasn’t much of a bombshell, although Mayer did link it to the protagonist as well in a roundabout way, thus in spite of the transparent bits, there were a few surprises. And, this novel’s story was in some ways a bid to buy time to prep for the closing hurrah; however there was still plenty of action, and a couple of very important pieces fell into place, so albeit that it wasn’t my favourite out of seven, it brought something to the RYLEE ADAMSON table, and at the end of the day that’s all that a reader can ask for.

I found that I lost sight of the heroine somewhat; she did exactly what she needed to do. Period. She allowed herself one tear for a fallen comrade, and a moment vis-a-vis the witches’ predicament, but for the most part she was all business. I’m concerned that the author is going to skirt most of the emotional stuff for the duration. As much as I love that Rylee never takes a day off, I can’t help except feel like I’m missing out on that side of her personality. Liam sat on the bench a lot too. The only character that was his usual delightful self was Alex. I ♥ that werewolf!

The payoff starts in VEILED THREAT—the next three books are going to be all-consuming. BRING IT!