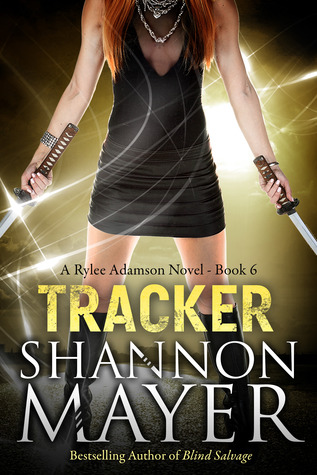 Bringing my allies together as war approaches is my number one concern. But that means I have to play nice with a vampire who is blackmailing me. If I don’t, I’m screwed and my family is dead.

But I don't play nice. And I have a backup plan. Kinda.

Throw in some new weapons being developed that work around supernaturals and I have more problems than I can handle on my own.

Good thing I have a kick ass team.

Even if they are on the other side of the world from me.

This book opened with Giselle “reading” the members of Rylee’s team which was such a tease because Shannon Mayer gave fans a quick taste of what’s to come, snatched it away, and then proceeded to distract us with yet another super-charged story. Way to hook me with short-term action while also guaranteeing that the RYLEE ADAMSON series stays at the very top of my to-be-read pile. TRACKER was a smidgen less airtight than the previous installment, so I deducted half a star. It was Milly’s fault.

I enjoyed the spread of this novel’s plot; it was beautifully executed, and also managed to weave in a bit of foreshadowing along the way. The heroine’s dilemma was one that I could relate to in that sometimes you have no choice except to pick the best of the worst, and in Adamson’s case that came down to Faris or Berget. A vampire Emperor/ess must be chosen, and unfortunately its slim pickings as far as the candidates are concerned, that is until Rylee creatively drafts a plan C.

Frank and Tara are the two newest black sheep to join the protagonist’s save-the-world squad which I wasn’t thrilled about because BLIND SALVAGE was the first installment that didn’t add any characters, and I’d dared to hope for a moment that the author’s long list of secondaries was finally complete. Guess not. Mayer does however dispose of an existing ally, so technically the tally only goes up by one. And, yeah, that means another dude(tte) bites the dust—rest easy, it’s not a big loss.

Milly continues to be the main thorn in my side in this series. She went from questionable, to downright loathsome, so I was happy to see her at long last get her just desserts. Her fall from grace lasted five books, thus in my opinion her punishment should have gone on for a minimum of two volumes which made the flimsy twelve chapters a huge outrage. I understand the need for it, but I will never be able to believe in her comeback because of its brevity which may cause problems for me later on.