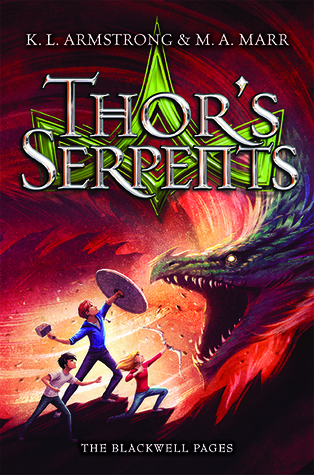 For fans of Percy Jackson and the Olympians, the thrilling conclusion to The Blackwell Pages, written by New York Times bestselling YA authors, K.L. Armstrong and M.A. Marr.
Thirteen-year-olds Matt, Laurie, and Fen have beaten near-impossible odds to assemble their fellow descendants of the Norse Gods and complete epic quests. Their biggest challenge lies ahead: battling the fierce monsters working to bring about the apocalypse.

But when they learn that Matt must fight the Midgard Serpent alone and Fen and Laurie are pulled in other directions, the friends realize they can't take every step of this journey together. Matt, Laurie, and Fen will each have to fight their own battles to survive, to be true to themselves, and to one another - with nothing less than the fate of the world hanging in the balance.

I thought this was a great ending to this trilogy. It picks up right where Odin’s Ravens left off. Matt knows that he is going to be Thor’s champion in the battle at Ragnarok. He has several friends that have been traveling with him throughout the stories that are champions for Loki, Odin, Baldwin, Freya and Frey.

In the first two books the kids have learn a lot and have really become a team. At the end of the previous book, it seems that one character going in a different direction than all the other characters. This starts this story off with the relationships tested between all of the friends. They’ve come so far, but yet still have so far to go.

I enjoyed the ending. I thought it wrapped up the story really well. I loved how these two authors brought the real life attractions like the museum and the Corn Palace and balanced it with things like mara (which are nightmares) and Jotunn, the fire giant. I think that they did a great job dealing with the emotions of thirteen-year-olds on a mission to save the world. These guys are betrayed by family and grownups and they have to learn to tackle these problems on their own.

I think that if you look at this book with the fact that it was written to appeal to grades 4-8, you will enjoy the story. I thought it was a great escape. I loved the Norse mythology. The characters were great. I’m a huge Kelley Armstrong fan, so I knew going into this series that I would love the characters. This is my first with Melissa Marr. I will say that this story has been a great ride. Just keep in mind that this is written for a younger age group and I think you will enjoy it.