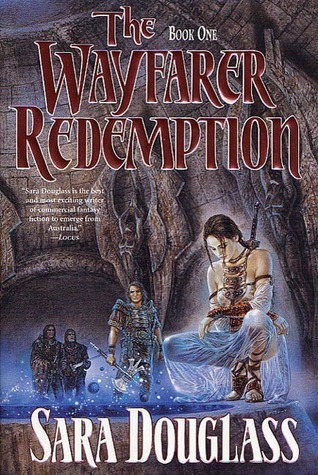 A thousand years ago the Acharites drove the Forbidden from their land. Now strange sightings along Achar's northern border foreshadow their return. The barbaric tribes of the Ravensbund are pouring south with tales of fearsome beings who feed on the terror of their prey.

Axis, bastard son of the dead Princess Rivkah, is sent to the battlefront of Gorkenfort with his elite Axe-Wielders. Once there, he must hand over command to his hated half-brother, Borneheld. But travelling north, Axis falls in love with Faraday - Borneheld's bethrothed, and meets two priests who challenge the very essence of his beliefs.

The Sentinels walk the land, the TreeFriend has been found, and the people of the Plough, the Wing and the Horn must set aside their differences and unite under one leader against the evil rising in the North...

It’d been approximately ten years since I last read THE WAYFARER REDEMPTION by Sara Douglass, and while I had not personally experienced the what-was-I-thinking-this-book-is-crap? phenomenon that so many readers have encountered during rereads of “favorite” books from eons past, I’d heard an awful lot about it . . .

Still, I wasn’t worried—my superior taste had consistently kept me from disappointment thus far, so why would this reread be any different?

This book was crap.

My only possible defense is that I read Terry Goodkind’s SWORD OF TRUTH series around the same time and it was significantly worse.

But even I don’t buy that.

“What was wrong with it?” you ask.

Well . . . After half a dozen chapters, my overall impression was that of a cheesy ’80s fantasy movie like Legend or Willow.

Don’t get me wrong, I like cheesy ’80s fantasy movies as much as the next person. In fact, I like both Legend and Willow.

It’s infinitely easier to forgive a several decades-old movie for being cornball, especially when you’re watching (and laughing at) it with a bunch of friends, then it is to forgive a book you’re trying to read.

All the genre clichés were present: lengthening and intensifying of the harshest seasons, incontrovertible hatred between half brothers, one legitimate, one not, a hero who suffers gut-churning guilt over a tragedy beyond his control, a bright-eyed, inherently good but extremely naive heroine (torn between the brothers), a monstrous evil threatening ALL of them . . . *grimaces*

At times, it almost felt like a parody of fantasy. If an IDIOT’S GUIDE TO FANTASY existed, it’d look like this book, or better yet, a Write a Fantasy by Numbers tutorial:

2. Create a prophecy foretelling DOOM should these races interbreed.
3. Interbreed.

If this sort of thing had been limited to the world-building and/or the plot, but had well-developed characters, I might have been able to handle it.

Without exception the characters were woefully exaggerated in nearly all of their behavior and reactions.

Like when the king receives bad news that he must pass along to his council:

“There is worse,” Priam whispered, and Axis felt a finger of ice trace through his bowels.

*repeats in a baritone* Through his bowellllllls . . .

Which was quickly followed with:

“But that’s not all.” Priam’s voice dropped to a whisper and his face blanched to a sickly yellow.

Then when he finally gets around to revealing that his sister’s tomb had been desecrated during an attack, his nephew (and heir) reacts like this:

“They stole my mother!” he screamed, his eyes wild, his hand still half-raised.

And of course all of this draws attention to other (illegitimate) nephew:

“At least Rivkah loved and respected my father enough not to betray him,” Axis said quietly, his eyes blazing fiercely as they locked with Borneheld’s. “Would that your father had received such love and respect from our mother.”

At which point this guy had had enough:

“By Artor!” snarled Roland, stepping between the two men, his massive flesh quivering with anger. “Is it not enough that we face this peril from the northern wastes? How can we face outside dangers when we tear ourselves to pieces within?”

He turned to Borneheld and abruptly slapped him across the face, sending droplets of blood scattering across the floor. “Is this how a WarLord acts in the heat of battle? What will you do when your foes taunt you across the battlefield, if this is how you react in the King’s Privy Council?”

See? It would have made a truly excellent ’80s fantasy movie.

Especially with the addition of sort-of-brother #3, the aforementioned monstrous evil (he has face tusks and lizard skin and drools), who might not be such a bad guy if he weren’t so terribly lonely:

“Timozel, will you be my friend?” it simpered.

*heart does not swell in sympathy*

There were also incalculable eye roll-inducers like Axis’ penchant for yelling, “Let’s ride!” any time he and his axemen went anywhere, and his faithful #2 named Belial . . .

But somewhere between the 30 – 40% mark, my senses became dulled and it got easier to bear. As hyperbolic as it was, it was still somewhat entertaining, PLUS there was the added benefit of seeing how my biggest objection from my original read had in reality stared me in the face unapologetically the entire time.

Still there are too many other (better) fantasy series out there for me to in good conscience recommend this one. Unless, you’re entertained by all that is excessive, in which case . . . step right up . . . *bows like three ring circus master*

20 responses to “Review: The Wayfarer Redemption by Sara Douglass (@jessicadhaluska)”