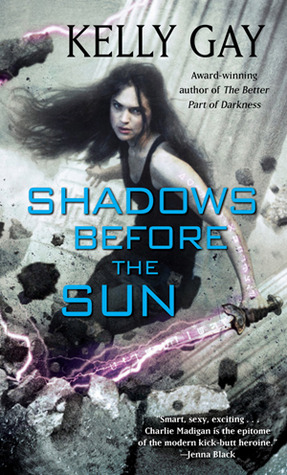 Shadows Before the Sun starts off where The Hour of Dust and Ashes ends. Hank has been taken by his people. He was wanted for treason. Everyone keeps telling Charlie that he is already dead and that she should mourn him and move on. In this world that Ms. Gay has built, there are three worlds. Earth, and the alternate dimensions of heaven-like Elysia and hell-like Charbydon. In the previous book, Charlie, Hank and Rex visited Charbydon. In this one, Charlie goes to Elysia to get Hank back.

While at the airport to take a portal to Elysia, Charlie runs into Alessandra. She is the oracle in Atlanta and has been alive for over 2,000 years. Charlie and Sandra don’t have a good history. They’ve never gotten along. Charlie thinks Sandra is a know-it-all. Sandra sorta is a know-it-all and acts like it. So Sandra knows that she is supposed to accompany Charlie on this journey, but because she is involved, can’t see more than that.

The first part of the book does drag a little bit, while Charlie is trying to get to Fiallan, the city that the Sirens call home. It is pretty secluded and it takes magic to get there. Then once, they arrive, they have to try to get to see Circe, the priestess. During this time, Charlie and Sandra do become closer friends. Charlie learns that Sandra isn’t all bad.

Throughout all of this, we do get some glimpses into Hank’s experiences. So, we do learn before Charlie that Hank is alive. But what Hank is experiencing is way worse than death. He has no idea that Charlie is coming for him.

There is some new revelations as to why a dark shadow is following Charlie around everytime she uses her powers. Also, the introduction of a new character of Leander. He is very mysterious. I’m sure he has a part to play later in the series, but I’m not sure where yet.

I’m in love with this series. If you haven’t started it yet, I highly recommend it. It is a wonderful urban fantasy with amazing world-building. The characters are amazing and funny. There is a ton of action and suspense. There has been quite a break between this book and next book, but it has a name and a cover (if not a blurb, yet). I’m hoping that it will in fact be released next year. I hope this series isn’t ended here.

20 responses to “Review: Shadows Before the Sun by Kelly Gay (@mlsimmons, @kellykeaton)”