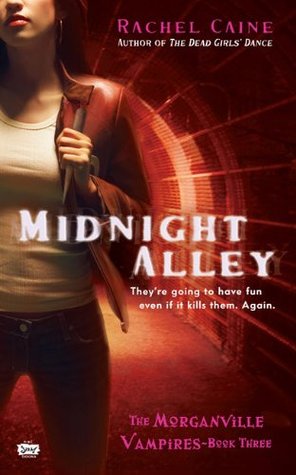 Claire Danvers's college town may be run by vampires but a truce between the living and the dead made things relatively safe. For a while. Now people are turning up dead, a psycho is stalking her, and an ancient bloodsucker has proposed private mentoring. To what end, Claire will find out. And it's giving night school a whole new meaning.

Rachel Caine has written one of the most unique vampire series that I have ever read, and I have immersed myself in these books as I read the first four back to back. I don’t know how many I can read before I have to stop for awhile, but right now I am enjoying every one that I have read, or am now reading.

The main character of these books is Claire, a young freshman in college, one that has managed to get herself completely tied up with the vampires that run the town of Morganville. She’s only sixteen, but is probably smarter than any of her professors. Now that she belongs to Amelie, she has to do anything Amelie wants her to-in exchange for protection for her boyfriend Shane, and her other roommates, Michael and Eve. Amelie is the most powerful vampire in the world, and is the founder of Morganville. Mega bully Monica is back in this installment, and she’s acting weird even for her.

One of my favorite things about this series is that each book continues the story from the previous books-sometimes just a few minutes later, or a few days. Because I am reading them one after the other, at times little plot holes do stick out for me, but nothing big-I just tend to notice things like that. And that is the only slightly bad thing I have had to say about any of these books so far. Well that, and the cliffhanger from the first book. Can’t forget to mention that, for all those that hate them.

The main premise of this installment involves an extremely old vampire named Myrnin, that is new to the story this time around. Myrnin is on the edge of madness at any given moment, and at times he tips right over into crazy town. Claire is assigned to help him with his research, before he slips over and doesn’t come back. The vampires are all sick, and going insane. Myrnin has been researching a cure for decades without success. Whenever Myrnin tips over into his insanity, his first thing to do is to try and attack Claire. It was pretty fascinating seeing how she handles him. He lives at the end of an alley that everyone has warned her to never go down, and now she has to go there on a regular basis.

As with all of these books, I love the snark that most of these close friends have in spades. It makes what is actually a very scary premise, have a lighter feel at times. Although Claire is new to the group, it didn’t take her long to become close to all of the friends, Shane in particular. As Shane is her boyfriend now, I have enjoyed the budding romance between them. Michael and Eve’s romance has evolved even more than Shane and Claire’s. As they are adults-compared to Claire-their romance is not G-rated. Nothing is explicit, but is mentioned, so you do know what is going on. There’s also lots of lustful feelings, and almost actions between Shane and Claire as well. That’s why I can’t get over this having a suggested twelve years of age as a starting range for this read. I would think 15+ would be better. Jumping off my soapbox now!

There’s a lot more that happens in this book, but I will just sum it up as more life and death moments, and an adult party that gets more than out of control. If you haven’t tried these books yet and paranormal reads are your thing, I highly recommend this series. It’s fun, it’s creepy, and it’s a total page turner.