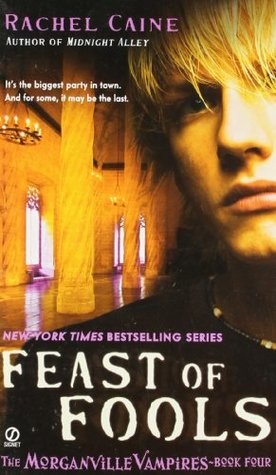 The wait is over. dig into the feast...

In the town of Morganville, vampires and humans live in relative peace. Student Claire Danvers has never been convinced, though, especially with the arrival of Mr. Bishop, an ancient, old-school vampire who cares nothing about harmony. What he wants from the town's living and its dead is unthinkably sinister. It's only at a formal ball, attended by vampires and their human dates, that Claire realizes the elaborately evil trap he's set for Morganville. (less)

If I thought the going got tough in book three of this series, Midnight Alley, I sure didn’t have any idea how even more tough things were going to get in the fourth book of this totally addicting series.

Claire is still sixteen-almost seventeen-and has just found out that her parents have moved to Morganville, something that really horrifies Claire. Here she thought they were safe in another part of Texas, only to have them move to what has to be the scariest place on earth. Scary due to the vampires that own the town, and pretty much everyone in it. As a freshman in college, Claire should have been exempt from learning anything about what is really going on in the town, just like any of the students that attend college there. Early on she learned way too much, and now is attached for the rest of her life to Amelie, queen of the vampires. And she’s got the gold bracelet that doesn’t come off, to prove it. It’s all about trying to keep her boyfriend Shane, and her friends and fellow housemates Eve and Michael safe. But even scarier than that, is the arrival of her parents along with Bishop and his entourage of vampires to Glass House, Claire’s home. Bishop and his friends don’t have a drop of good or humanity in them. All he wants is to find Amelie-his daughter-and take Morganville from her. And he wants to use Claire to do it.

As with all of these book so far, I was totally drawn into the story and not let go of until I pretty much finished it. They are all novel length, but for me a really quick read. And that is due to the wonderfully realized characters, and of course the fascinating premise. Claire is such a good character, so loyal and giving, but at the same time a spitfire to say the least. Her snarky mouth gets her in trouble more often than not. Shane, her boyfriend, is hot headed to the extreme, with a mouth to match at times. He is also totally wrapped up in Claire and sweet to her, not to mention that he would protect her with his life if need be. Eve is Claire’s snarky best friend-goth to the extreme-almost(probably) as a send up to all the vampires in town. Michael is a wonderful guitarist and owns the house that they all live in. He and Eve are a couple now. And oh yes, Michael’s a new vampire. Myrnin, the ancient (and pretty insane)vampire that Claire is working with, is quickly becoming a main character and is quite the interesting character! In addition, Oliver, owner of the local coffee shop, and also a vampire, has a big part in all of these books. You never know if he is going to be good or bad at any given moment.

Well written, these books always have an event that each one is built around, at least so far. As the title suggests, there’s going to be quite the feast and Bishop is the one doing the inviting. Not someone you would ever want to break bread with, to say the least-of course it wouldn’t be bread in Bishop’s case! That’s not to say that other events don’t happen, they do, but there’s always a major one. Now that Claire’s parents live in Morganville, Claire is trying to juggle life with them versus her life at Glass House with her friends, and all the vampires that keep showing up there.

As of this writing, I am half way through book 7, and I am still enjoying every minute of the reads. Exciting premise’s, fast paced writing, wonderful characters, and of course all the snark involved, makes this a must read for me. They are just so much fun to read. Highly recommended to people at least age 15+.