Changing the World, One Lion Shifter at a Time

One of the things I love about my latest release DANCE WITH THE DEVIL is the strength of my heroine. Now don’t get me wrong, I’ve written powerful females before, but there’s something about Jillian that stands out. She’s special. Not just because she’s a kick-ass half-blood lion shifter destine to be Alpha of her Pride. But because she is living proof that being different doesn’t make you weak, it makes you strong. You see, Jillian’s mom was a witch, her father a lion. And because of that, Pride mythology designates her as weak, a lesser shifter than the pure-blood lions. But Jillian takes that belief and spins it on its head. Why? Because her shifter form is a black lion, and that makes her stronger and more powerful than any of the pure-blood lions in the Pride.

Shifters are known and ranked in the Pride by their shifter forms, not their bloodlines. And Pride mythology also says that black lions are the strongest, most badass lions of them all. They are considered a gift to the Pride from the Fates. A gift strong enough to lead the Pride and pull them back onto the straight and narrow. They only appear when the Pride has strayed from the path the Fates have placed them on. Basically, the appearance of a black lion is the equivalent of getting a swift kick in the butt by a higher power. It’s a neon sign that screams, “You’re doing something wrong.”

For a half-blood lion shifter to be a black lion in an era where pure-blood lions are discriminating against them is a strong statement. It places Jillian in a unique situation. As a half-blood, she’s been raised to believe she’s inferior, but inside her lies this dominant beast that can’t be silenced. And, as she is the strongest member of her Pride, she’s named Alpha. And being an Alpha means she has an opportunity to change the Pride forever, maybe even shifter culture overall. All she has to do is own her own power and go for it. Which she does. She makes it her life goal to suffocate the prejudice that runs rampant both in her Pride and in the shifter community as a whole. Her journey to accept herself and find her own strength is inspirational, and that is why it is one of my favorite aspects of DANCE WITH THE DEVIL. Jillian inspires me. I hope she will inspire you as well.


Angela Dennis lives in the Midwest with her husband, son, and a sheltie with a hero complex. When she is not at her computer crafting stories, she can be found feeding her coffee addiction, playing peek-a-boo, or teaching her son about the great adventures found only in books.

The pain in Carrick’s eyes ripped at her heart. Jillian was pretty sure what was wrong. Every five years, the Prides gathered by order of the Conclave. Even the prodigal children were called back. The Elders left nothing to chance, ordering the shamans to send forth a compulsion spell, cloaked in an invitation. Fighting it wasn’t just painful, it was useless. If you didn’t heed the call, the enforcers were sent to bring you back by force. Some Prides took advantage of the summons to hold a Claiming, but never hers. Her father preferred to do his Claimings in secret, hand-picking the participants. Or he had, until now.
Jillian moved across the converted warehouse. Even though it was sparsely furnished, the space had a warm touch to it. Several colorful area rugs covered the concrete floors alongside a smattering of brown leather furniture, high tables and barstools. Carrick had stopped beside the bar, one hand on his hip, the other resting on the mahogany surface. The urge to confess and tell him she understood lay heavy on her heart. And she would have done it, if it wouldn’t have added to his burden.
Her attraction to him was beyond dangerous. But, thankfully, that attraction wasn’t mutual. If it had been, it would have been impossible to turn him away. A smarter person would have left town the second they realized Carrick was a shifter. But, like an idiot, she had stayed, unable to resist being around him during her short stint of freedom.
Even now, the call of the Pride echoed in her mind like the beginnings of a migraine. She massaged her aching temples. Carrick was so close that her hand brushed his shoulder as she reached for her head. Although it was an innocent touch, the heat of his body seared her skin.
Damn it. Fate had a twisted sense of humor. No other man had ever affected her like this.
When he turned, the intention in his green eyes was unmistakable. She stepped back, stunned, heart pounding. With a nervous swallow, she licked her dry lips. He moved closer, eyes focused on her mouth. Torn between flight and surrender, she froze.
Their bodies brushing, Carrick ran his hands down the length of her arms. “How many layers do you have under there?” He squeezed her shoulders gently. “Take them off. I’ll make a fire.” He grasped her hand, tugging her toward the fireplace.
Jillian didn’t move. She couldn’t do this. “Thought you didn’t want to talk?”
“I changed my mind.” He released her hand and moved across the room, crouching before the hearth to kindle the flames.
She couldn’t make herself move, either forward or away. This was her last chance. Once she walked out that door, she was gone forever.
He stood and turned to face her. Behind him, the flames flickered, casting shadows across the concrete wall. The undisguised yearning in his eyes was her undoing. She walked toward him, unzipping her jacket as she moved. It hit the floor with a thud.
She was barely a foot from him when the cat inside her began to purr, arching against her skin, begging to be touched. A sweeping flood of need rose, burning her blood and shortening her breath. She squeezed her eyes closed and fought for control.
Carrick had settled on the leather couch before the fire. As he patted the cushion beside him, Jillian again reminded herself of all the reasons she should walk away, but found she didn’t care. She wanted him, and it was about damn time she got something she wanted. To hell with the consequences. 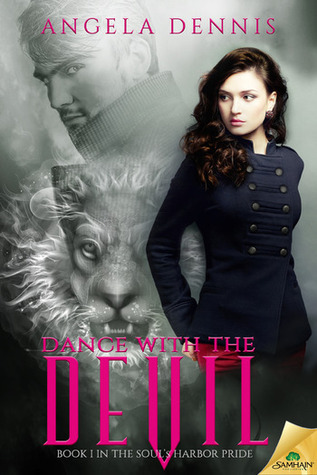 Born to be enemies. Destined to be lovers.

After killing one of her father’s enforcers, half-blood lion shifter Jillian Winters ran for her life, landing in an upscale bar halfway across the country. Her boss, Carrick—a pure-blood shifter—has no idea his barmaid is a fugitive.

When her father’s recklessness puts the Pride at risk, Jillian must return home and assume his place as Alpha. But not before she indulges in a taste of the attraction that’s been building for years between her and Carrick.

Carrick Granger has had a soft spot for Jillian from the moment she stepped into his bar, soaking wet and afraid of her own shadow. He knows she has secrets. So does he. He’s also the outcast son of an Alpha—and now that his father is dead, he, too, has been summoned home.

Thinking they’ll never see each other again, the simmering heat between them ignites like a match to gunpowder. But then the bullets start flying, forcing them to choose—duty to their Prides, or the one person they can’t live without.

Warning: This book contains deception, lies, betrayal, a sexy lion who is determined to claim his mate, and a mating bond that will change the landscape of the Prides forever


Were lions, pride politics, crazy alpha’s, betrayals, deception, murders. And of course romance. This is what you get while reading this book. And it really is a good read.

Jillian ran away from her island home several years ago in order to escape living under the thumb of her certifiably insane father, who just happens to be the alpha of her pride. He has never been nice to her, manipulated her all of her life, and made others bully her as well. She might be daughter of the alpha, but she is a half blood and that’s a really bad thing in her world. Her mother was a witch, and that makes her have magic as well. Pure bloods hate half bloods, thinking that they taint the pride. It doesn’t help that they are afraid of the magic that half bloods are able to use. Jillian works as a waitress in a bar owned by Carrick. Carrick is a were lion as well, but since Jillian has cloaked herself in magic, he doesn’t realize she’s a shifter. He only knows he can’t be with her because he thinks she is human. Jillian really wants to be with him, but doesn’t pursue it. On the night that she is called home for a claiming ceremony, she gets attacked. And is saved by Carrick. This event is the catalyst for the rest of the book as everything changes between the two.

World building. This author has created a world of were lions, two factions of them, that live on the same island, but separate. They have claiming days where all eligible(mateless) adults are locked in a underground complex for a few days. During this time, they must pick someone to be with, hoping to come out of it with the mating tattoos that show up if they are true mates. This is forced on them because of the dwindling numbers of were lions. When Jillian goes home, she ends up underground as well. She’s not alone, as Carrick is also there.

Characters. Jillian and Carrick are both really strong alphas. In addition, Carrick’s brother, Lucas, is soon to be alpha of his pack even though he isn’t as strong as Carrick. I really liked his character and hope he is featured in one of the upcoming books. Jillian’s best friends, Gareth and Abbey, were fun characters that I would also like to see a book about, or if not that, at least see more of in future books. Jillian’s father is named Reginald and is crazy. Enough said about him. Quinn is the regulator that works with the counsel over all were lions, and is at the claiming to try and further the counsel’s agenda. Or is he? And yes I want to see a book about him, as well. Can you tell I am planning on reading the next books in this series when they come out?

I wasn’t really sure about the premise of the claiming days at first. It ended up being way more than just a love fest, and featured lots of action and some near death experiences. Trapped in an underground bunker that is locked is one thing, but add in a killer with an agenda to get rid of Jillian, and the book took on a whole other level of interest for me. So I came away from the read having enjoyed the whole thing. Good world building, characters, premise, sensual romance? What’s not to love? I would recommend this to adult paranormal romance readers.

36 responses to “Guest Post and Review: Dance With the Devil by Angela Dennis (@Mollykatie112, @AngelaDennis)”