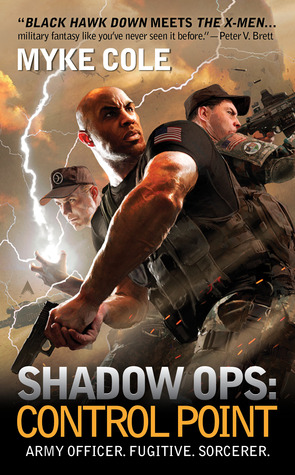 Across the country and in every nation, people are waking up with magical talents. Untrained and panicked, they summon storms, raise the dead, and set everything they touch ablaze.

Army officer Oscar Britton sees the worst of it. A lieutenant attached to the military's Supernatural Operations Corps, his mission is to bring order to a world gone mad. Then he abruptly manifests a rare and prohibited magical power, transforming him overnight from government agent to public enemy number one.

The SOC knows how to handle this kind of situation: hunt him down--and take him out. Driven into an underground shadow world, Britton is about to learn that magic has changed all the rules he's ever known, and that his life isn't the only thing he's fighting for.

I don’t know if any of you have been to Oak Ridge during its Secret City Festival, but if you have, you know the rat-a-tat-tat in the background that sounds suspiciously like a machine gun . . . is a machine gun. And the beginning of CONTROL POINT by Myke Cole feels a lot like machine gun report—jarring and erratic.

You hit the ground running with an MC (Oscar Britton) first working for, then fleeing a government that seems to be both the Good Guy and the Bad Guy. It’s so action-packed that everything else was overwhelmed by the constant additions to the equation.

He’s this military guy who bails the second he becomes the hunted instead of the hunter, causing the death of numerous others, and if he had his way, he’d’ve kept running as the bodies piled up behind him.

Did he mean to cause the deaths of those other men?

But that’s the difference between murder and manslaughter, and guess what? Both land you in the slammer.

And then the nebulous dual nature of the government rears its ugly head: the government has a monopoly on magic, which I vehemently protest. BUT. Who else has the manpower to hunt down the assholes who rationalize their continued existence over the long lives and safety of others?

*beats conundrum drum* (with my head).

And when Britton stops running (18%), things calm to a manageable level.

In any other book, I’d hate, loathe, despise and abominate a character like Britton. He’s selfish. He makes numerous BIG mistakes. He gives into his anger, lashing out at others instead of keeping a cool head.

But in CONTROL POINT, he’s only one of a multitude of grey threads that contribute to the underlying principle that EVERYTHING is grey. There is no black and white. Right and wrong depend on context, not rules and regs. And when the good of ALL is dependent on the training of a single dangerous individual, are a few—or a LOT of—(questionably) innocent lives worth the tempering of one who could (maybe) change the world?

But in this first installment of his SHADOW OPS series, Myke Cole makes a damn good case for withholding judgement.

I’m not going to lie, it was a frustrating journey. It was hard to not have a Good Guy to cheer for and a Bad Guy to hate. It was hard for the lines to blur back and forth, forth and back. But I really appreciate what Cole has done here (woke my foggy, trapped-in-the-status-quo brain the hell up), and I enthusiastically endorse it.

You shouldn’t pick it up when you want your standard UF fix. Oh, don’t panic, it’s a relatively quick and easy read, but if you revel in absolutes, this one will make your head want to explode. In a good way. Probably. If you stick with it. Unless you’re rigid and uncompromising, in which case I got nuthin’ for you. Highly recommended.