I had the privilege of receiving a review copy of RIVER’S RECRUIT as part of this Bewitching Book Tours blitz, but you can score a FREE download right now via Amazon, iBooks, and B&N, so there’s absolutely no reason why you shouldn’t one-click it ASAP. And, you can also try your luck in the giveaway too. WIN/WIN!


Charlotte Abel was born and raised in Oklahoma where she met her soulmate, Pete. She chased him to Boulder, Colorado and finally convinced him they were meant to be together forever. They’ve raised three kids, two ferrets, three dogs and countless hamsters — and are still happily married.


She’s in love with “real” life and paranormal romance. When she’s not reading or writing, Charlotte enjoys hiking, bicycling and primitive archery (although she’s never shot at anything other than a target!) 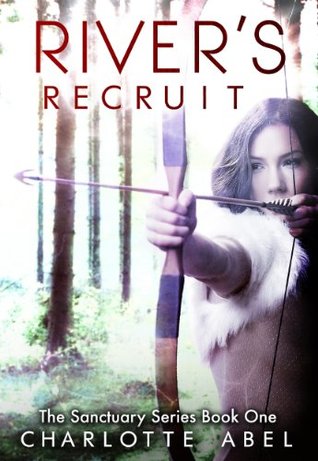 River believes all outsiders are disease infested idiots and a threat to her secret society of wolf shifters. The laws that keep her people safe are absolute. No outsider can ever know of their existence. But when a handsome stranger risks his life to save River from a mountain lion, she has two choices…recruit him into her society as a servant, or kill him.

All Jonathan wanted was a few weeks of solitude, backpacking in Colorado, to help him deal with the aftermath of his service in Afghanistan. When he learns River plans to keep him with her forever, he starts planning his escape. What neither of them plan on is falling in love.

A strange cult that lives in the mountains of Colorado, one that has nothing to do with the outside world. But is it really a cult?That’s the premise of this more than fascinating story. Jonathan Mcknight goes on a camping trip alone and ends up meeting a beautiful woman named River, who takes him to her home due to blizzard conditions. Little does he know that now that he knows about her, he can no longer ever go home. The conditions are pretty primitive, the clothes worn by the residents resemble something out of history books, and the rituals used to keep outside germs from entering the community rigorous. In order to keep Jonathan from being executed on the spot, she tells her guardian, Reuben, that Jonathan is her recruit. Jonathan humors her and agrees that he has given up on modern life, and that he will not leave. Of course he is plotting the whole time to escape-until he finds out that River will be executed if he leaves. The council in charge of the communities-one, the elite that live inside Sanctuary Mountain, and the other, topside dwellers, that barely make a living-are very quick to execute, whip, or cut off a hand or finger for even the smallest infraction. But there’s an even bigger secret that everyone is keeping from Jonathan, the reason that they live apart from society, and it’s a paranormal one. Werewolves.

This book. I literally read it non-stop and when I was done I immediately read the second one(River’s Remorse) non-stop. For two days I immersed myself in River and Jonathan’s world, and totally enjoyed the whole thing. Yes, it’s a paranormal romance at times, but it’s also a saga of sorts about a whole other secret world that exists apart from everyone else. I found the world building to be fascinating. Ms Abel has created a world that is ripe for rebellion and a prophecy that tells of an outsider that will change everything. There’s a lot of unfairness in this world, some women are turned into whores, others into servants-all against their wills. Men are allowed several wives and concubines, and women have nothing to say about it. That’s just a couple of examples, but the authors world building is rich with detail after detail about this world with nary an info dump in sight.

River and Jonathan are good characters. In the beginning when we meet Jonathan, I really didn’t like him that much. But after going away to war, he comes home a changed man, and his character as a man had grown greatly, as well. River is an innocent, but very feisty, and has grown up in a man’s world. A horrible world by anyone’s standards. When she meets Jonathan her life changes in ways she would never had imagined. Lots of good peripheral characters keep the story moving, and there’s an array of villains to be had here, as well. There’s also a lot of good people that want change. Will Jonathan be the one to bring it? And why him anyway? Or is there someone else that can do the job?

There’s plenty of action, violence, and intrigue in this book, but the heart of the story for me was River’s and Jonathan’s love story. The author knows how to write a good romantic story, and the romance itself was very sweet. Don’t expect explicit sexual details in this installment, but there is enough sexual situations talked about, and almost sexual situations happening, to keep this from being YA. Not to mention the violence described.

I highly recommend this book to adult paranormal romance fans, ones that like a complex story.