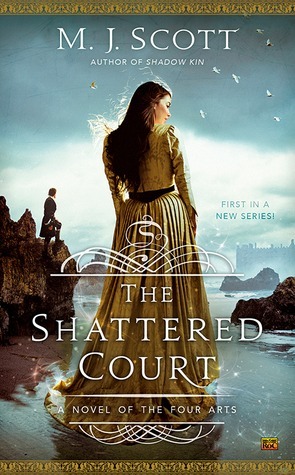 First in a new fantasy series from the author of the Novels of the Half-Light City.

Entangled in a court ruled by tradition and intrigue, a young witch must come to terms with newfound power and desire—and a choice between loyalty and survival.…

The royal witches of Anglion have bowed to tradition for centuries. If a woman of royal blood manifests powers, she is immediately bound by rites of marriage. She will serve her lord by practicing the tamer magics of the earth—ensuring good harvests and predicting the weather. Any magic more dangerous is forbidden.

Lady Sophia Kendall, thirty-second in line to the throne, is only days away from finding out if she will be blessed—or perhaps cursed—with magic. When a vicious attack by Anglion’s ancient enemies leaves the kingdom in chaos, Sophia is forced to flee the court. Her protector by happenstance is Lieutenant Cameron Mackenzie, a member of the royal guard, raised all his life to be fiercely loyal to the Crown.

Then Sophia’s powers manifest stronger than she ever imagined they would, and Cameron and she are inextricably linked in the process. As a witch unbound by marriage rites, Sophia is not only a threat to the established order of her country, but is also a weapon for those who seek to destroy it. Faced with old secrets and new truths, she must decide if she will fight for her country or succumb to the delicious temptation of power . . .


Let me tell you a story, *whispers* you might have heard it before:

Once upon a time a princess was widowed young. She returned to the palace from her husband’s estate, and she took a handsome guard for a lover, b/c she was no longer innocent of the ways between a man and a woman. It was a secret easily kept, b/c outside of the bedroom, Handsome Guard was a stone who presented a disinterested front as implacable as a mountain. But in private . . . *waggles eyebrows*

Princess, of course, has ladies-in-waiting, and her favorite is a young girl from a small country estate. Princess dotes on her, refreshed both by Hayseed’s wild, unsophisticated ways and her naïveté.

Stuff happens and tragedy strikes the palace, separating Princess from her two greatest comforts who are . . . as it turns out . . . together . . .

Which is odd, b/c Hayseed and Handsome Guard have had almost zero interaction with each other, but when the palace is attacked Hayseed is running an errand for Princess under Handsome Guard’s protection, and as much as he longs (underneath the rocky outcrops of his exterior) to return to his Princess, Hayseed’s safety must take priority, and so they flee to the forest through an ever-so-conveniently-located waygate portal in the cellar of place-of-errand.

All that time alone in the woods does strange things to people, even stone-like Handsome Guards and wild, but naïve Hayseeds.

Soon Handsome Guard is admiring how Hayseed is tougher than she looks, and from there it’s only a short hop to realizing she’s quite fetching, and then Hayseed gets her magic (b/c turns 21, and apparently that’s when it happens), and her magic reacts to Handsome Guard’s in a decidedly sexual manner, and OOPS, now they’ve done it, and YES, I do mean it.

“Wut?” you ask, and I agree, that was a rather unnecessary plot twist (b/c would’ve happened anyway, *whispers* heard this story before, remember?), but it took away reason and accountability, so why not?

And that’s basically it. Over and over again. Lazy “plot twists” to speed up already inevitable outcomes.

View Spoiler »B/c really? Why have Hayseed and Handsome Guard struggle against their newfound passion and the resulting guilt for a significant portion of the book when you can just have them found out immediately upon returning when Hayseed’s bonding-to-the-goddess ceremony doesn’t work (b/c not a virgin anymore)? « Hide Spoiler

B/c it’s not the same old tired story that I object to. It’s not my favorite (b/c sordid), but it’s not the worst either.

It’s the carelessness. The heedless way the story plows through crucial steps that make a told and retold story fresh.

Then there’s the blatant resemblance between Hayseed and Handsome Guard and Nynaeve al’Meara and al’Lan Mandragoran. Don’t know who they are? Then it won’t bother you. But if you’ve read Robert Jordan’s WHEEL OF TIME, it’s almost not like greeting old friends.

It’s just as not funny when Hayseed scoffs at the low necklines currently dictated by fashion while simultaneously drawing attention to her assets to provoke a reaction from Handsome “Stoneface” Guard.

Hayseed even puts her waist-length brown hair in a plain braid—for simplicity’s sake—while she and Lan Handsome Guard are on the run. Doesn’t yank on it when she’s angry though. BUT she does suffer from portal sickness in a manner reminiscent of Nynaeve on a ship.

And I’m done. But like I said, if you haven’t read WoT, you won’t mind the same-and-not-the-sameness, and despite being slaves to outside influences the sex is HAWT, so not a total loss. Recommended if that sounds like your thing. *does not judge you if that’s your thing*

9 responses to “Review: The Shattered Court by M.J. Scott (@jessicadhaluska)”