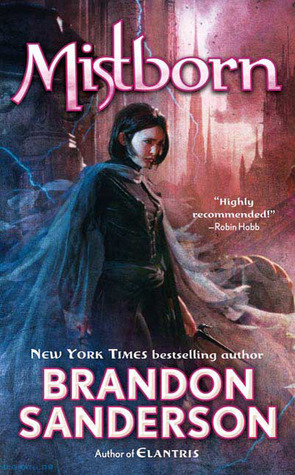 Once, a hero arose to save the world. A young man with a mysterious heritage courageously challenged the darkness that strangled the land.

For a thousand years since, the world has been a wasteland of ash and mist ruled by the immortal emperor known as the Lord Ruler. Every revolt has failed miserably.

Yet somehow, hope survives. Hope that dares to dream of ending the empire and even the Lord Ruler himself. A new kind of uprising is being planned, one built around the ultimate caper, one that depends on the cunning of a brilliant criminal mastermind and the determination of an unlikely heroine, a street urchin who must learn to master Allomancy, the power of a Mistborn.


Are you one of them? Are you? Did you rave about MISTBORN and convince me it was one of the BEST fantasy series ever? You can’t believe I haven’t already read it—I’m going to LOVE it. Hmm? DID YOU?!

Then you, friend, are who I hate.

I collected your clues and gathered your hints like freaking MANNA, and when you did-the-thing, I . . . panicked. But then I thought, no, no, this CANNOT be, he wouldn’t do this, and I went back through all my meticulously collected clues and hints and found an explanation, a perfectly. Reasonable. Explanation.

An explanation that made complete sense.

An explanation that would keep my heart in one piece instead of the shattered, brittle thing it has since become.

YOU are the Deepness, Mr. Sanderson. YOU are that which will destroy the world. And YOU will do it GLEEFULLY.

I hate you most of all.

I can’t write the review that I want to . . . I can’t talk about Sanderson’s brilliance as he cultivated my doubt, and how that doubt made the loss so much worse: View Spoiler »I DENIED HIM. MORE than three times. *changes name to Paul* *runs away to live like hermit in wilderness* *is generally miserable* « Hide Spoiler

Which is exactly what he intended. It was so masterfully done, it couldn’t be an accident.

Why does your manipulation make me admire you so?

Probably b/c (thanks to you) I’m a shadow of myself. <——oh, look at that. You probably PLANNED THAT, TOO.

The world of the Mistborn is not a pleasant place.

There’s always a downtrodden servant class (skaa) in a Sanderson series, but this world’s version is particularly bleak.

Ash falls like rain from the sky, supplying the skaa with a never-ending, yet thankless workload. They’re beaten regularly, often resulting in their deaths. A pretty daughter is a curse rather than a blessing, b/c not only will the Master feel obliged to have his way with her, but when he gets bored, she’ll be killed.

Halfbreeds are to be avoided, you see.

The nobility is sometimes blessed with magic. Magic which passes genetically to offspring, and we can’t allow the peasants to gain that kind of power, can we?

In the city where corruption among the nobility chokes the air almost as much as the ashfall, some skaa thumb their noses at the system.

They form street gangs and steal whatever they can from those who would enslave them, existing in a cutthroat world by embracing a cutthroat mentality.

Most of the gangs are comprised of ordinary skaa, but a few are different, more organized crews than low-level thieves . . . They take bigger jobs, they are the royals of the petty crooks, they are the Mistings.

And in a few extremely rare cases, they are the Mistborn.

Not every halfbreed life is snuffed out before it can begin . . .

And Kelsier is the greatest of them all.

Among the common criminals he is legend:

“That’s where he got those scars, you know,” Disten said. “The ones on his arms. He got them at the Pits, from the rocks on a sheer wall he had to climb to escape.”
Harmon snorted. “That’s not how he got them. He killed an Inquisitor while escaping—that’s where he got the scars.”
“I heard he got them fighting one of the monsters that guard the Pits,” Ulef said. “He reached into its mouth and strangled it from the inside. The teeth scraped his arms.”
Disten frowned. “How do you strangle someone from the inside?”

But Kelsier was betrayed, and when he finally escaped the pits that claimed his wife, he was determined to be more than a crew leader. More than a thorn in the Lord Ruler’s thigh or a bramble in his path.

And when you think about it, as far as planning goes, there’s not much difference between organizing a chancey heist and plotting to overthrow a corrupt ruler who thinks himself a god . . .

One might even suggest that Kelsier is the perfect man to do it . . .

Beyond his suitability for the task, there’s something immensely likable about the image of this noble Fagin flipping a coin he keeps to anchor his Allomancy, the ability to metabolize and manipulate metals.

And here’s the thing about Sanderson: the man’s a genius. Now that I’ve familiarized myself with him, I don’t think I’ll ever be able to stop reading his books. Even if I’m not thrilled about the execution, there is always incredible potential in his ideas.

Take the concept for this series: what would happen if the hero meant to save the world . . . failed?

SO. We have servant class con men with flash + an immortal tyrant = Revolution! We have a world in ruin one thousand years after the hero of prophecy failed to save it. Add to that Sanderson’s trademark misdirection, and, well . . . Despite my brokenness in the aftermath, how could I not read it? How can you not?

Highly recommended, but only with LOTS of cake (or something stronger) to drown your agony.

PS, this changes nothing. I still hate all of you.