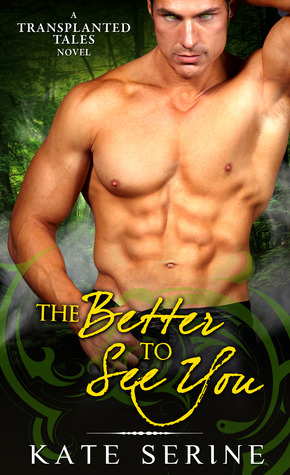 Once upon a time, a spell went awry and Make Believe characters were cast into the ordinary world. And the results aren’t always happily ever after…

Everyone thinks fairy godmothers can do no wrong. But if not for a certain spell mis-cast by Lavender Seelie, Cinderella’s former fairy godmother, the Tales would not be stuck in the Here and Now. Fortunately for Lavender, she’s about to get a second chance at a happy ending…

The Refuge, a sanctuary for wayward Tales, seems like the perfect place for Lavender to start a new life—especially when she discovers an unexpected ally in Seth, the brooding werewolf who’s been typecast as a villain ever since his run in with Little Red Riding Hood. But when humans from nearby towns start turning up dead, their bodies mutilated with archaic Tale symbols, Lavender wonders if Seth’s deep sensuality has blinded her to the truth. And that distraction could put innocent lives in danger. Including her own…

I read the first book in this series late last year. I had picked up as a free kindle book at the time. I really enjoyed the story, so when I went to go on vacation this summer, I requested this book from the library so I could continue with the series. This series is based on fairy tales and literary characters who have been put into the real world (think Once Upon a Time TV show).

In The Better To See You, we have Lavender Seelie, who has been Cinderella’s fairy god mother in the Make Believe and assistant in the Here and Now burning down Cindy and Prince Charming’s house. She has been a drunk and completely depressed. She is the one who sent everyone to the here and now and that has really messed with her psyche. Red (Yes, she is Little Red Riding Hood and the heroine from the first book. She is an enforcer and kicks ass.) thinks she needs to get out of town for a while, so she sends her to the Refuge. It is a place where Tales who need to get away and aren’t dealing well with the Here and Now.

Seth Wolf, he is the Big Bad Wolf, is hiding outside of the Refuge after he was accused of murder in the previous book. He was quite surprised when he finds someone coming down his driveway. He really doesn’t want her around and someone depending on him, but he also knows the need to get away.

Then people in around the Refuge start getting brutally murdered. Red shows back up with her partner and lover, Nate Grimm, who is a grim reaper to the Tales. Tess Little (Little Miss Muffet) also comes to help investigate. I was glad that we got to spend some time with the Tales we met in the first book. There are also several we meet in this book that I really want to know more too. I won’t go into detail so as not to spoil any surprises. I was actually surprised at some of the twists that took place in this book. I didn’t see them coming at all.

All in all, this was a great book. It was very emotional watching two characters who have had a very tough life, both in Make Believe and in the Here and Now come together and make themselves very happy. I can’t wait to get time to dive into the next book, which is Little Miss Muffet’s. I really like her character, so it should be interesting.

18 responses to “Review: The Better To See You by Kate SeRine (@mlsimmons, @KateSeRine)”