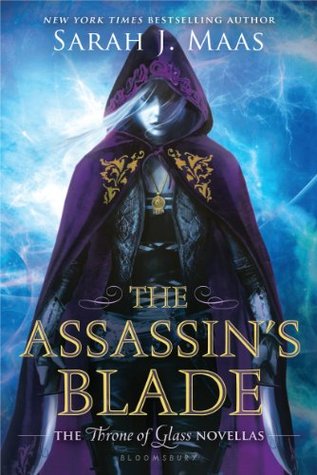 Celaena Sardothien is her kingdom's most feared assassin. Though she works for the powerful and ruthless Assassin's Guild, Celaena yields to no one and trusts only her fellow killer for hire, Sam.

When Celaena's scheming master, Arobynn Hamel, dispatches her on missions that take her from remote islands to hostile deserts, she finds herself acting independently of his wishes—and questioning her own allegiance. Along the way, she makes friends and enemies alike, and discovers that she feels far more for Sam than just friendship. But by defying Arobynn's orders, Celaena risks unimaginable punishment, and with Sam by her side, he is in danger, too. They will have to risk it all if they hope to escape Arobynn's clutches—and if they fail, they'll lose not just a chance at freedom, but their lives...

A prequel to Throne of Glass, this collection of five novellas offers listeners a deeper look into the history of this cunning assassin and her enthralling—and deadly—world.

Included in this volume:


***Please be aware that while refraining from spoiling the specific novella I’m reviewing at the time, there may be spoilers from any prior novellas.***

I view these stories as five separate but related tales—like a series—b/c that’s how I originally read them. I’ll include links at the bottom of the post to the individual reviews on Goodreads, for those of you who are afraid of being inadvertently spoiled.

In the summer of ’12, I was desperately seeking new reading material, and stumbled across the preview chapters of THRONE OF GLASS by Sarah J. Maas.

I downloaded them, devoured them, and gashed my teeth in impatience when I discovered the full book wasn’t due to be released for several more weeks.

There were four prequel novellas that were available. So I one-clicked all of them and read them immediately.

They only increased my hunger for THRONE OF GLASS.


~The Assassin and the Pirate Lord~

First, I think it’s important to recognize that one of–if not the–main purposes of these novellas to grow Celaena from an intolerably insolent and arrogant adolescent into a world-wiser (but still cocky) young adult.

The #1 complaint about this series is that readers don’t like Celaena.

Personally, I love her, but I understand why others might not. She’s a superlative character who some people can’t handle her extremes, and that’s only one of a dozen legitimate issues.

There are several loudly voiced complaints that, as far as I’m concerned, don’t hold water. I’ve already addressed my feelings in regards to the claim that she is too girly to make a believable assassin in my Throne of Glass review.

The other assertion I cannot abide is that Celaena “never does anything,” or “never kills anyone.”

That she’s basically all talk.

Maybe I’m confused, but I’ve never supposed that assassins are meant to go around killing EVERYONE indiscriminately. And she’s not just an assassin. She’s the King of Assassins’ heir. Adarlan’s Assassin.

At least half of her identity is reputation, and it wouldn’t behoove that reputation (or be good for business) to run around like a maniac slitting throats and eviscerating passersby.

In this novella, she’s a sixteen-year-old girl who single-handedly disarms and disables the entire crew of a pirate ship. She easily defeats the Pirate Lord in combat, using his own weapons to do it.

Beyond establishing herself as a seriously kick-ass heroine, the foundation for something that will shred your heart into teeny, tiny pieces is also laid. <——*WAILS*

Everything is better with pirates.

SO. Not my favorite of the bunch, but a close(ish) second.


~The Assassin and the Healer~

This novella wasn’t part of the original four. I chased down pieces of it on various blogs, over the course of several days before CROWN OF MIDNIGHT was released.

Anyway, I liked this one a lot, too.

So should anyone who thinks Celaena doesn’t kill often enough. How about six or eight mercs in a dark alley after they try to rob and attack a barmaid?

All I’m saying is that’s an awful lot of bodies piling up for an assassin who allegedly doesn’t assassin.

We also learn some Celaena background: that her country was destroyed by war, and she feels a kinship with others who have suffered similar fates. That as a child she had dreams that are in complete contradiction to her current status.

Aaaannddd we (once again) get to observe the softer side of Celaena. The side that compels her to intervene on behalf of others when she can. many reasons I’m able to overlook her more abrasive qualities.

Bottom line: a worthy addition to the canon.


~The Assassin and the Desert~

Oh, my FEELS. They hurrrrrrt *sobs*

So what does is say about me that this is my favorite of the group? Hmm . . .

In the inevitable aftermath of her actions in Pirateville, Celaena is sent into the blistering, unforgiving heat of the desert to train with the Mute Master, Arobynn’s (infinitely more benevolent) Southern counterpart.

She has one month to train with the Silent Assasssins. One month to earn the Mute Master’s respect in the form of a letter to Hamel on Celaena’s behalf, commending her efforts and abilities.

This is the novella that makes me determinedly profess that readers’ NEED to read the prequels.

There are people and places and events that have already begun to play a greater role in the main books, with half a dozen foreshadowings of things to come.

And it won’t make sense, if you haven’t read the first one, and after that . . . Well, why not just read them all?

Of course you do.

And who could blame you?


~The Assassin and the Underworld~

This novella should have been called THE ASSASSIN AND THE TANGLED WEB OF AROBYNN HAMEL, but I guess it doesn’t rollllll of the tongue the same way.

I really wish I could give you an accounting of the events that take place here unhindered by the knowledge of what’s to come.

I read it too many times and it broke my heart too completely.

THE ASSASSIN AND THE UNDERWORLD is about what happens when Celaena returns to the Assassin’s Keep after Arobynn beat her into unconsciousness and sent her to the desert.

Celaena arrives full of confidence and more than a little bit of self-satisfaction.

She succeeded in accomplishing her nearly-impossible-to-complete task. More than succeeded. Was sent home from the Red Desert with a fortune great enough to purchase her freedom.

When she struts into Arobynn’s office, she has every intention of telling him, and leaving him.

Unfortunately . . . It doesn’t work out that way.

Instead, she allows herself to fall back under his spell. Not fully, she’s been made too wary for that, but enough that she becomes an unwilling accomplice in his nefarious plans one last time.

This is where we first see the depth of Arobynn’s treachery.

My thoughts on Celaena’s lack of immediate response to said treachery upon her return to Rifthold in ToG: View Spoiler »Many think Celaena is being willfully obtuse about the role her mentor played in the events that led to Sam’s horrific death and her imprisonment at Endovier, but this is something I understand:

“Father, brother, lover—he’d never really declared himself any of them. Certainly not the lover part, though if Celaena had been another sort of girl, and if Arobynn had raised her differently, perhaps it might have come to that. He loved her like family, yet he put her in the most dangerous positions. He nurtured and educated her, yet he’d obliterated her innocence the first time he’d made her end a life. He’d given her everything, but he’d also taken everything away. She could no sooner sort out her feelings toward the King of the Assassins than she could count the stars in the sky.”

And there’s nothing she can DO about it in the course of the first few books. She knows they’ll see each other again, but as much as she desires vengeance and is determined to get it:

“In the silence of her bedroom, she swore an oath to the moonlight that if Sam were hurt, no force in the world would hold her back from slaughtering everyone responsible.”

She also dreads it.

Celaena is a work in progress. She’s headstrong and stubborn. Arrogant with poor impulse control. BUT. She is growing. Steadily. Consistently. Eventually she’ll reach the point where she can take an unobscured look at Arobynn and acknowledge not only how he betrayed her to the king, but how he was none of things to her she’d struggled with reconciling: father, brother, lover.

He was a plague. « Hide Spoiler


~The Assassin and the Realm~

Maas is an expert at cultivating DREAD. It may not be as stealthy here, what with us already knowing that Celaena—in some context—has failed, but that doesn’t negate the fear, the roil in your belly, as you push yourself to keep reading, to find out what happened, what went wrong, so that at least then . . . it will be over.

As I said earlier, I read these before reading THRONE OF GLASS, so I can’t state from experience that if you’re having issues with Celaena, reading THE ASSASSIN’S BLADE will fix them. BUT. I can say that I’ve never had any issues with her character development, and the majority of readers who have taken my advice have found themselves understanding her better than they had previously. Beyond that, you need the background from Celaena’s time in the Red Desert to fully appreciate what’s happening in the main series (my favorite YA series, incidentally). <------FYI.

SO. Read it. I’m so far passed “recommending” it that I’m brandishing it wildly.

“My name is Celaena Sardothien,” she whispered, “and I will not be afraid.”