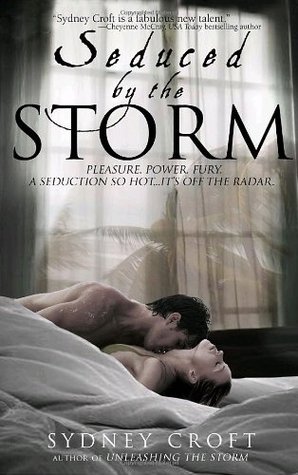 They met in a steamy Florida bar then spent a night of mind-bending passion. Two secret agents who each possess unique telekinetic gifts and whose combined sexual powers leave neither of them unscathed. For ex-Navy SEAL Wyatt Kennedy, assigned by the Agency for Covert Rare Operatives to the most treacherous mission of his career, the woman in black leather and lace has just become more than a one-night stand. Because Faith Black is the sole barrier to the success of his mission and not even Wyatt's legendary seduction skills can penetrate her deep cover.

Faith's psychic gifts make her one of the world's most dangerous women but she hides a secret pain she shares with no one. Until Wyatt. And Faith has an agenda of her own: using her unique powers to save someone close to her, a move that pits her against a man she thought she'd never see again. For as a deadly hurricane is unleashed across the eastern seaboard, desire reignites between Faith and Wyatt, exposing secrets that thrust them both into harm's way. With the hurricane sweeping closer, and their erotic hunger for each other growing, these two wary hearts must come together to heal, to trust . . . and to harness the power of a storm that could consume everything in its path.

Wyatt is an ex-Navy SEAL. He also has some telekinetic abilities. He is currently working on an oil rig in the Gulf of Mexico to attempt to take the weather machine from ITOR. He also has the ability to seduce anyone he wants, but they don’t remember having sex with him. His body releases pheromones that make him irresistible. He is not a fan of his power because he doesn’t have much control of it, especially the women waking up not remembering the sex with him. That is until he meets Faith in a bar and takes her back to the hotel and she remembers everything.

Faith is an agent with a much smaller agency in the British Isles, one so small that ACRO doesn’t even know it exists. It is very much a surprise that they are both after the same computer that runs the weather machine. Wyatt wants to destroy it, but Faith believes that it can do good in the right hands. Faith has her own telekinetic abilities that are very rare.

While I really enjoyed the romance and storyline of this book, it is the overall story arc that keeps pulling me back to this series. I love the suspense that continues between ACRO and ITOR. It isn’t the same in every book, with different characters and different powers. Each one has their own problems to solve. The secondary relationships in this series is great too. Creed and Annika’s relationship really makes big strides in this book. Plus Dev, I love Dev and his story is so heartbreaking in story.

Because of the secondary relationship stories and the overall story arc, I would recommend reading this series from the beginning. It is a great paranormal romance that leans more towards erotica. Don’t let that make you believe that there isn’t action, because there is plenty of action, there are plenty of steamy sex scenes too. I’m excited to get to the next book. I’m also sad that I’m now halfway through the series. I don’t have that many of the books left.

10 responses to “Review: Seduced by the Storm by Sydney Croft”