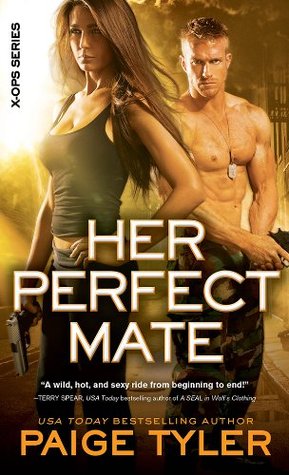 When Special Forces Captain Landon Donovan is picked for an assignment with the Department of Covert Affairs, he’s stunned to find his new partner is a beautiful woman who looks like she couldn’t hurt a fly, much less take down a terrorist.

Ivy Halliwell isn’t your average covert op. Her feline DNA means she can literally bring out the claws when things get dicey. She isn’t thrilled to be paired with yet another military grunt, but Landon is different. He doesn’t think she’s a freak and he’s smokin’ hot.

Soon they find themselves facing a threat even greater than anyone imagines...and an animal magnetism impossible to ignore.

I’ve been wanting to try Paige Tyler for a long time. I finally picked up book one in her X-Ops series. I don’t know why it took me so long. I really enjoyed it.

We have Landon who is pulled of a very important mission in Afghanistan and told to go back stateside for a different mission. He isn’t given any details. He isn’t happy about leaving his team for what he feels has to be a paper pushing job at the Pentagon. He is trying to figure out what he did wrong to deserve the change in assignment.

Ivy doesn’t have good luck with military partners. They look down on her. Her most recent partner got himself killed because he wouldn’t listen to her. She is really not happy about the next one to come into the program to partner up with her. She is part of Department of Covert Operations. She is known as a EVA, extremely valuable asset. She is a shifter. Even in this unit designed for shifters, they are still looked at as lesser. They must be partnered with a human.

I loved the chemistry between Ivy and Landon. They had to fight to come together. Neither really trusted the other. They were willing to work together for the common goal. They made a great team. I really enjoyed the mixture of suspense and romantic tension between the characters. I liked several of the secondary characters.

My biggest gripe was the Ivy starts off a bit whiny with a need to have approval of Landon, even though she doesn’t really approve of him. I know not all heroines can be tough as nails, badass from the get go, but she had some real issues. She does get better by the end of the book. I see this series have a ton of potential. I can’t wait to pick up the next book in this series.