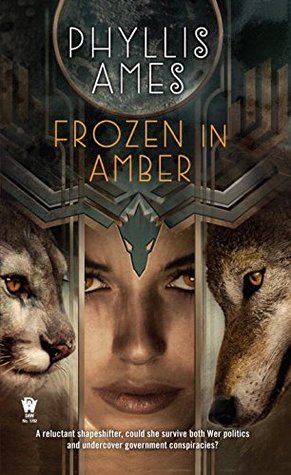 Amber Treganis constantly reinvents herself. New clothes, new hairstyle, new car—anything she can do to exert a level of control over her life. What she can't control is her shape-shifting other self: the WerCougar that sinks its claws into her brain during the three nights surrounding the full moon.

Though she is a natural-born shifter from a prominent WerCougar family, Amber has been unwilling to change into her cat form ever since a terrible tragedy cost her the man she loved. And she has little patience with Wers of any species who embrace their otherness more than their humanity. She focuses on her life as a defense attorney in Mt. Hood, and stays out of Wer politics.

But after a blurry night of hunting, Amber begins to notice changes in her transformation. When she hears rumors of research to discover a treatment for shifting, she suspects she may have been unknowingly given the experimental therapy.

With the help of Adler, a WerEagle active in community politics, Amber tries to hunt down the truth about this cure, while staying off the radar of the FBI, which tracks and manages Wer communities in secret.

But Amber doesn't realize how much she depends on her Wer sense until, one by one, they begin to fade. And Amber is left increasingly ill—and increasingly human. Can shifter who is losing her abilities survive for long in either human or Wer society?


I agreed to review this novel entirely on a whim; Phyllis Ames is a new-to-me author, and standalone Urban Fantasy is rare, so of course I said gimme. The wolf on the cover may have helped cinch the deal, but make no mistake, this story is about a cougar. Attorney and heroine are practically oxymorons, however Amber made it work, and if that wasn’t enough to cause FROZEN IN AMBER to standout, the protagonist was also a vegetarian kitty.

The structure of the law firm, and of WerCougar politics in general were similar to Kelley Armstrong’s sorcerer run cabals, and miss Treganis’ place in the hierarchy was kinda like Lucas Cortez’s, so if you enjoy that type of set-up (which I do) then you’re sure to dig the feline version. Solo installments do have their downfalls though, the author had to cram all of the crucial UF elements into one book, and consequently some areas were stronger than others.

Amber was a pretty kooky character what with her dietary choices, refusal to shift unless absolutely necessary and her overall reluctance to live as most Wers do. I’d expected more humour considering the lead’s numerous personality quirks, but the tone was a little too serious for my tastes. Yet, that didn’t stop Treganis from falling madly deeply in love with Adler after a measly three weeks. It contradicted her otherwise straight arrow demeanour in my opinion.

The plot seemed like it was building up to something big given the experimental therapy, moles within the firm, Grampy’s secrets, and so on and so forth. Wrapping up a large scope story in 400 pages is a feat enough in itself, however incorporating a HEA as well is asking for trouble. The solution to Amber and Adler’s pickle was entirely too cleanly executed. Again, there are pros and cons to series vs. single works. By and large, Ames did good.

FROZEN IN AMBER was a break from the norm, and the minimal commitment was nice. A summer read through and through!

6 responses to “Review: Frozen in Amber by Phyllis Ames”