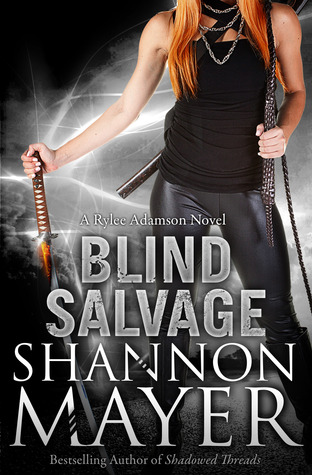 Crossing into Ogre country is dangerous when you're a polite, respectful gal. Which means I already know I'm in for a wild ride, despite the back up I've brought along.

Even when things start to go sideways, and enemies close on us from every side, I still believe we have the upper hand.

How very blind can one person be when it comes to a salvage?

I'm about to find out.


I’ve been hemming and hawing about this series since the get-go, but Shannon Mayer dropped all of the white noise in BLIND SALVAGE, and at long last got down to the nitty gritty. No new secondaries were added, and some of the plot threads started to make sense. The story also revolved mainly around the heroine for a change, and Rylee got her butt handed to her more than once which is exactly what I’ve been holding out for. Weird I know, however this book is what Urban Fantasy is all about in my opinion, and what RYLEE ADAMSON has been in short supply of—a good sucker punch to the guts!

A lot was unmasked in this novel; the cause of Milly’s betrayal, Berget’s master plan, Faris’ hidden agenda, and the Tracker prophecy gains steam. Yet, despite all of the above, this installment felt like a carefully honed edge. Past occurrences clicked, future possibilities were divulged, and the protagonist’s road to date albeit winding, no longer seemed as though it was simply dumb luck. It took five books for this series to come together, but come together it did, and in a rather dramatic way I might add. I guess in this author’s case, slow and steady wins the race!

Even though I’ve read hundreds of pages that have starred RYLEE ADAMSON, I still feel like I barely know her at all because her crew has been priority #1, and up until presently, at least one extra member has joined in every volume. Adamson had to go at it alone a great deal in BLIND SALVAGE, and when allies were needed they actually HELPED her instead of adding more problems to the pile. I was ecstatic with the amount of face time that fans got to take in, and that was the push I needed to sign my name on the dotted line to be counted among Rylee’s ride-or-die.

The O’Shea / romance saga was mostly put on hold which had me exhaling a sigh of relief; he still has some alpha issues to work out, and has yet to learn how to play nice with others, however Mayer drops a discreet grenade in this book, and if (when) it detonates, I might regret sending so much hate his way. The author also axes another character while taking steps to recoup a lost soul, so at this point I can only cross every body part I have, and pray that my favourites make it out of this series alive. Either way, I’m locked in, so do your worst, Shannon Mayer!

BLIND SALVAGE activated phase two of RYLEE ADAMSON, and it was 5-stars all the way.