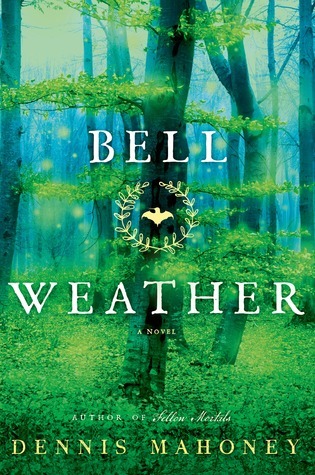 When Tom Orange rescues a mysterious young woman from the flooded Antler River, he senses that their fates will deeply intertwine.

At first, she claims to remember nothing, and rumor animates Root—an isolated settlement in the strange wilderness of colonial Floria. Benjamin Knox, the town doctor, attends to her recovery and learns her name is Molly. As the town inspects its spirited new inhabitant, she encounters a world teeming with wonders and oddities. She also hears of the Maimers, masked thieves who terrorize the surrounding woods.

As dark forces encircle the town, the truth of Molly's past spills into the present: a desperate voyage; a genius brother; a tragedy she hasn't fully escaped. Molly and Tom must then decide between surviving apart or risking everything together. Dennis Mahoney's Bell Weather is an otherworldly and kinetic story that blends history and fantasy, mystery and adventure to mesmerizing effect.


Do you get feelings about obscure books? You see a cover, hear good things about an author, scan a blurb, and/or are partial to a publisher, so you get a feeling—more of an educated guess, really—and that makes you choose a book that otherwise would have been completely overlooked?

I used to do that fairly regularly. Not so much anymore (b/c no time for that nonsense).

BUT. That’s exactly what happened here, and it’s the best gamble I’ve made in a long, long time.

What if when Spain and France and England decided to colonize the Americas they discovered a land saturated with magic? What if the native peoples not only worshiped various aspects of nature, but were so closely tied to them that they were an extension of those aspects? What if rain sometimes fell up into the sky, and light sometimes fell like rain?

That’s the only way I can think of to describe this world. It’s not the Americas and various Europeans are not the settlers, but they walk and talk and quack like colonial Americans . . .

The story opens in the midst of a flood. A flood of flowers. Flowers that may or may not float up from the bottom of the river bed, and they do this at the same time every year.

The river and it’s banks are so covered with blossoms that Tom Orange almost doesn’t see the unconscious woman in a floral print dress, clinging tenaciously to a tree branch as she is swiftly carried toward the falls that Tom has no hope of her surviving should he not reach her before she goes over.

I felt the urgency, trying to keep pace with Tom as he recklessly rode through bog and trees to rescue the maybe-already-dead-women. I had to stop several times, forcing myself to read more slowly, my eyes continually attempting to dart ahead.

The rescued woman is a mystery.

There are only so many places she could have come from (exactly three), but she claims to have no knowledge of what came before her near drowning. The only thing she seems to know is that her name is Molly.

FUN FACT: the name Molly means “ocean of bitterness” or “RIVER of dissent.”

Beyond the spectacular world-building and mystery of Molly’s origins, BELL WEATHER is fraking hilarious.

Tom owns and manages a tavern. The tavern, in fact, as it’s the only one in Root, and Root is the only settlement on the quickest land route (HA!) between the two major settlements on the continent.

His employees include his ran-away-from-home cousin Bess, a mute he has become adept at deciphering, and a crone so old even the elderly of Root can’t remember a time when she was young.

An old and superstitious crone:

“Any trouble while I was gone?”
“Someone hexed my right hand—I haven’t determined who—and I could not make a fist until I finally guessed the healing word and scrawled it down with ash. Otherwise, no.”

An old, superstitious, and rather cantankerous crone:

Tom entered the Orange and bounded up the stairs between the taproom and the parlor, both of which looked empty at a glance, and squinted in the darkness after so much sun. He pressed past his ancient cook, Nabby, who knelt below the landing with a bucket and rags, wiping blood off the steps and angry with him now, not only for his pell-mell approach but for sloshing her water, bumping her head, and tracking mud where she had cleaned the minute before he came.
“And break my neck while you’re at it,” Nabby said, “and then you’ll have a broke-neck cook and a poor tongueless wretch and I should like to see you keep an orderly tavern after that.”

Also on the premises is a cat likely as old as the crone:

Tom hesitated, thinking he had made Pitt hiss. Rather it was Scratch, the cat who stalked the Orange. He’d been hiding on a step between the men without a sound and now he crouched, fierce and mangy, and defended his position. He was missing half an ear and had a milky left eye, and his decrepit coat was battle scarred and stank of rotting offal. Scratch vanished and appeared several times a week and threatened man, woman, and child with bites, sprays, scratches, and underfoot tangles that occurred too often not to be intentional. Tom had known the cat since time out of mind. According to Nabby, the oldest woman in Root, Scratch had been around since she was a girl. The sole explanation for the cat’s longevity—excluding the assumption that the creature was demonic—was that every ten or fifteen years for nearly a century, Scratch had spawned an identical heir, who presumably killed his parents and returned, by feral instinct, to terrorize the Orange.

The funniest incidents by far involve Molly, but you’ll have to take my word on that b/c spoilers.

However, it is not all fun and games.

There is darkness in the past of many of the characters, as well as a band of thieves who steal “the most valuable part” of their victims plaguing the present.

The humor merely breaks up this darkness so you don’t become woebegone (and thank goodness for that).

BELL WEATHER by Dennis Mahoney was a wonderful discovery. Between the fantastical world, the hilarious characters, and a criminal mind made all the more frightening for his mad genius, this is a book you’ll be hard-pressed to put down. Highly recommended to any fantasy reader.