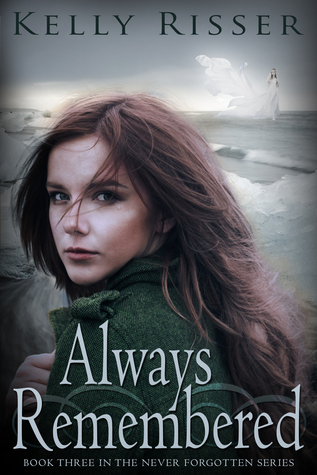 One clue... what does it mean?

Ken, the leader of the Blue Men of the Minch, has kidnapped Evan. Before they left, Evan was able to leave a package for Meara--her grandfather's necklace wrapped in a cloth napkin with one word written in blood. Azuria. Unfortunately, Meara doesn't understand it and neither does her dad or Kieran.

When Dad and Aunt Brigid attempt to rescue Evan, Meara and Kieran begin to train the clan on how to fight and defend their home. A war is brewing, and Meara is determined their people must prepare for the battle. The training sessions are long and arduous, but the Selkies work hard to learn.

Meanwhile, Evan wakes and finds himself in Belle Tresor, the home of sirens. He's bound to his blue form, unable to transform to human, and Ken has plans to use Evan's powers to destroy the Selkies. Thankfully, he's not alone. He befriends a siren named Deanna and several Blue Men. Can he trust them to help him escape or do they have ulterior motives?

As both sides prepare for an ultimate confrontation, the stakes are high and friendships are tested. Some will rise to be victorious. Some will be destroyed. But love and loyalty will be always remembered in this exciting conclusion to the Never Forgotten series.


The word Selkie sounds way more interesting than seal shifter-at least I think so. This is the third and last book in this series about an older teen girl that finds out that she is half selkie. And that her father is leader of the Scottish clan of selkies, located on an enchanted(warded)island off the coast of Scotland.In the last book, Current Impressions, Meara had just moved to the island to live after her mother’s death. Her boyfriend, Evan, had come to Scotland as well to do a work study with his professor, and of course to be able to see Meara. Things really went wrong in the last installment, and Evan has been captured and taken prisoner by Ken, the man the professor was supposedly working for. Selkies are being murdered and war is imminent.

As before, the book’s point of view changes back and forth from Meara to Evan. I really appreciated that the author chose to write it this way, as both stories are compelling and needed to be told in their entirety. Now that the two have been apart, the couple does start to act like they really are broken up. However, Meara never stops trying to find and help Evan.

I am going to be vague about the rest that happens as I don’t want any more spoilers than I have to. We do find out who is starting the war and why, and that person becomes the main villain of this read. We get to see Meara come into even more of her powers and while her father is away, she starts to teach her people to fight. Meara was born to help lead her people and she never shies away from it. She wants her people to be able to defend themselves and even tries to teach them the magic that her and her family wields so easily-something no one has ever tried before.

In the end, this book genuinely surprised me with the way it all wound up. I knew things were pretty impossible for some characters, but never imagined that it would end up like it did. I was happy about most of it, although we do lose a good character to the war and I hated that. I enjoyed this series and thought that it was well written with good characters to root for. Romance, intrigue, and lots of action will keep you turning pages-at least it did me.

This book is published by Clean Teen Publishing. However, I would probably not put this in the young adult category anymore. In the front of the book, there is a disclaimer about the book with a NA rating. It may have been posted in previous books, but I didn’t notice it until now. There isn’t anything explicit, but I would say 16+ would be correct due to some sexual situations.

FYI-I posted this as paranormal romance, but in a way I would say it’s almost an underwater urban fantasy of sorts.