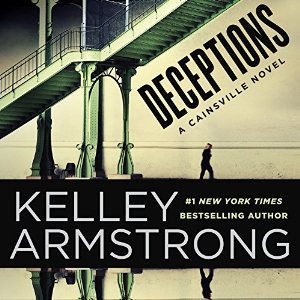 The #1 New York Times bestselling author of the Otherworld series delivers her most suspenseful novel yet, where the discovery of Cainsville’s dark past and the true nature of its inhabitants leads to murder, redemption, love, and unspeakable loss.

Olivia Taylor Jones’s life has exploded. She’s discovered she is not only adopted, but her real parents are convicted serial killers. Fleeing the media frenzy, she took refuge in the oddly secluded town of Cainsville. She has since solved the town’s mysteries and finds herself not only the target of its secretive elders but also her stalker ex-fiancé.

Visions continue to haunt her: particularly a little blond girl in a green sundress who insists she has an important message for Olivia, one that may help her balance the light and darkness within herself. Death stalks both Olivia and the two men most important to her, as she desperately searches to understand whether ancient scripts are dictating the triangle that connects them. Will darkness prevail, or does Olivia have the power to prevent a tragic fate?

If Kelley Armstrong wrote it, I will read it. But, for the first time in my long history as one of this author’s devotees, I could take or leave the CAINSVILLE series. Book 1 took some effort to finish, 2 was WOW all the way, and then here comes the love triangle in 3. I’m not fully against this romantic trope however DECEPTIONS came down with a severe case of woe-is-me, and as much as I thought that the narrators did wonders for this audiobook’s tone, it wasn’t quite up to snuff.

These novels are rooted in Welsh mythology, specifically Mallt-y-Nos (Matilda of the Night) folklore, so I knew that a Olivia / Gabriel / Ricky triad was imminent, my beef lies with how it came about. The degree of drama found therein was of Young Adult proportions, and the you-can’t-fight-fate level was extremely high. It was all just incredibly clichéd, and not a path that I’d expect Armstrong to go down at all. Gabriel is broken, Ricky is perfect except for the fact that he’s not Walsh, and Taylor Jones wants the freedom to choose.

The prior two installments kept me guessing, but this latest addition was easy to foretell which was yet again out of character for this author. I effortlessly linked the Spina Bifida thing to Olivia’s serial killer parents, and the James frame job wasn’t much of a stretch either. Still, the world-building was sound, the Fae artifices measured up to their notoriety, and the heroine’s personality really came through in this volume. I was previously under the impression that this series was much darker than it actually is which brings me to the narration.

Initially, I found that Carine Montbertrand’s voice was a little too old lady-ish, but once I got used to it my opinion quickly changed. Her performance was a pivotal factor in lightening up an otherwise dark story line, and I’m seriously contemplating backtracking to OMENS because apparently my internal monologue was way off. Mozhan Marno’s portrayal of the secondaries was on pace, although I do wish that a male narrator had been used for Gabriel & Ricky. The transitions to the “vision” scenes were jerky, but otherwise it was a satisfying listen.

DECEPTIONS was a moderately good read by a sterling author, make of that what you will.