It’s summer, so while I’m off NOT writing reviews, I thought it would be a good time to introduce you to, Angie Sandro, and give you a taste of her latest New Adult Paranormal Romance release, DARK EMBRACE.

The touch on my outstretched hand is so light that it takes me a moment to notice. By then the cold, gel-like substance coats my fingers. When I try to pull back, the sticky goop sucks in my hand, which tingles as it cuts off my circulation. It reminds me of quicksand—of how my father’s body looked when they pulled his mummified remains free. His wide-open mouth filled with sand when he gasped his last breath. I never should’ve stayed when they retrieved him from his sandy tomb. The image is seared into my memory.

Now I’m being sucked to my death too.

My scream bursts out and echoes against the stone walls, taunting me. I jerk my arm, but like quicksand, the more I struggle, the more I’m drawn in. My chest presses against the membranous barrier. Instinctively, I hold my breath as I fall forward.
My thoughts grow fuzzy from lack of oxygen. The need for air grows more desperate. If I don’t breathe, I’ll die. If I breathe, I’ll die faster.

I can breathe. How? Why?

Who cares? I fall to my knees, drinking in air. My eyes are open, but I can’t see anything. As in a dream, my emotions are magnified. I’m trapped and devoid of all hope of escape. Loneliness overwhelms me. I wrap my arms around my legs, needing the connection of touch, since my other senses are deprived. I don’t know how long I sit here rocking before I hear a sob.

The broken sound cuts through my apathy. No longer alone in this hell, I crawl forward, listening for another sound. Silence falls around me like a heavy cloak, and I begin to doubt that I heard anything except my own cries. My hands continue to search in the darkness, movements becoming more and more frantic. When I touch the warmth of a body, I cry out in relief so powerful that I tremble in reaction.

I press closer. I can’t believe what my senses scream out to me, but I inhale his deep, earthy scent. I run my hands up his arms, feeling his taut muscles beneath my fingers. His skin has the soft, fine smoothness of a newborn. My hands travel upward over broad shoulders to tangle in silky hair. I trace the hard angles of his cheekbones down to the indentation on his chin, and then, up to his lips. I remember this face as it hovered above mine and how his tongue felt on my body.

“I found you,” I whisper, leaning forward. My mouth finds his to initiate a kiss so light it’s more of a mingling of breaths.
His hands tremble as his fingers explore my skin with butterfly wing-like caresses, and I shiver. He moves hesitantly. Our chests press together. His heartbeat quickens, and my own beats in an adjoining rhythm, perfectly synchronized with his.

His head dips until it’s pressed into the hollow between my shoulder and neck. He inhales, breathing in my scent. His tongue swirls over my collarbone. I press against him and cup the back of his head, my fingers twining through his hair. My other hand wraps around his waist, clenching tightly as his teeth rasp against my skin.

A distant, barely coherent part of my mind wonders now what? Only his lips answer my question, traversing my neck in soft nibbles with intermingled flicks from his tongue, dissolving all rational thought from my brain.

Angie Sandro was born at Whiteman Air Force Base in Missouri. Within six weeks, she began the first of eleven relocations throughout the United States, Spain, and Guam before the age of eighteen.


Friends were left behind. The only constants in her life were her family and the books she shipped wherever she went. Traveling the world inspired her imagination and allowed her to create her own imaginary friends. Visits to her father’s family in Louisiana inspired this story.


Angie now lives in Northern California with her husband, two children, and an overweight Labrador. 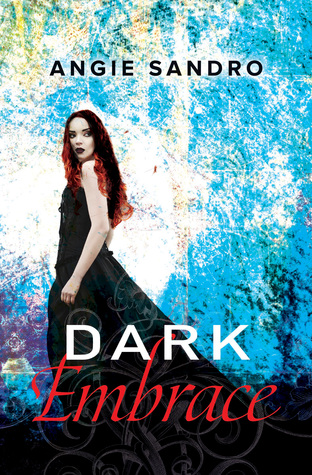 Rescued from the brink of death by her cousin Mala, Dena Acker returns to the land of the living with a terrifying gift. Still connected to the darkness that almost claimed her, she can tell when someone’s about to die–but there’s nothing she can do to save them. Desperate to rid herself of this cursed ability, Dena has only one chance at peace . . . and two very different men willing to rescue her.

For centuries, Ashmael has seen more souls than he can count but he’s never been drawn to anyone the way he is to fragile, beautiful Dena. She fills the dark void of his days with light, and he would sacrifice anything – even his immortality – to cross over to her world and ease her suffering. But he can’t afford to be discovered by police detective Michael Anders, who is investigating the deaths that surround Dena. While Michael fights his growing attraction to her, the evidence still points to Dena as the killer. Both men have the ability to save Dena from her horrible fate, but which one can she trust with her darkest secrets?

3 responses to “Spotlight and Excerpt: Dark Embrace by Angie Sandro”