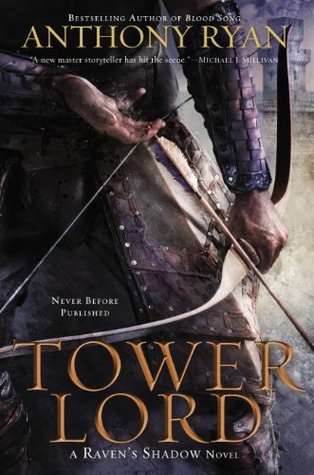 In Blood Song, Anthony Ryan introduced readers to “a fascinating world of conflicting religions and the wars fought in the name of those faiths” (Library Journal). Now Ryan’s epic tale continues as Vaelin Al Sorna discovers that there is no escape from the call of destiny…

“The blood-song rose with an unexpected tune, a warm hum mingling recognition with an impression of safety. He had a sense it was welcoming him home.”

Vaelin Al Sorna, warrior of the Sixth Order, called Darkblade, called Hope Killer. The greatest warrior of his day, and witness to the greatest defeat of his nation: King Janus’s vision of a Greater Unified Realm drowned in the blood of brave men fighting for a cause Vaelin alone knows was forged from a lie. Sick at heart, he comes home, determined to kill no more. Named Tower Lord of the Northern Reaches by King Janus’s grateful heir, he can perhaps find peace in a colder, more remote land far from the intrigues of a troubled Realm.

But those gifted with the blood-song are never destined to live a quiet life. Many died in King Janus’s wars, but many survived, and Vaelin is a target, not just for those seeking revenge but for those who know what he can do. The Faith has been sundered, and many have no doubt who their leader should be. The new King is weak, but his sister is strong. The blood-song is powerful, rich in warning and guidance in times of trouble, but is only a fraction of the power available to others who understand more of its mysteries. Something moves against the Realm, something that commands mighty forces, and Vaelin will find to his great regret that when faced with annihilation, even the most reluctant hand must eventually draw a sword.


The last several fantasy series I’ve read have all begun excellently, then, at the very least, gone on to have lackluster second installments . . . so I’ll admit . . . I was leery of this book.

And in the beginning, I’d thought my fears justified.

Like BLOOD SONG, it opened with Veniers’ historical account, but after that I was treated to a new POV . . . I bloody hate surprise POV changes. HATE them. And not only was this a new POV, but it was a new previously unknown POV.

Who is this Reva and why should I care? Hmm??

Then came a chapter from Frentis’ POV, which should have been amazing (b/c Frentis), but instead was miserable (b/c slave), and it was only after that that we got back to Vaelin, the sole POV from book 1.

I’ll be honest, it took about 20% for me to engage with the new POVs, and not just b/c surly. The development was slow, even for the characters I already knew.

Once I crossed the barrier, boy howdy . . . Ryan has a way of infusing just enough casual humor into horrible situations—tangentially related humor. He doesn’t make light of the horror, he just manages to carefully distance you from it, so you don’t become overwhelmed.

Like in Veniers’ prelude to Part I. We’ve just learned that he’s been captured and enslaved by the Volarians who are intent on conquering the Unified Realm, and then . . . *cues dramatic music * . . . the WORLD.

But seriously, these are nasty people. Nasty people who know who Veniers is, granting him both a certain usefulness and a certain precariousness of situation: the General of the Volarian army requires that Veniers chronicle his military genius and the inevitable demise of Alltor. If this is not accomplished to General’s satisfaction . . . *raises eyebrows significantly*

So pretty awful, right? BUT:

“Only ever used on land before, but I saw their potential for bringing us victory here. A successful marriage of land and sea warfare. Write that down.”

The expanded world-building was also excellent.

I made a determination recently that my favorite type of fantasy world is the extreme-post-destruction-of-highly-advanced-civilization (think Atlantis) world.

Guess what type of world this one is? *grins*

This time we meet the ancient priestess of one of the tribal peoples who requests Lyrna’s presence on her mountain (*coughs* active volcano *coughs*) and reveals much about the nature of the Enemy.

Then, nearly halfway through, we’re reunited with who ended up being one of my favorite characters from BLOOD SONG: View Spoiler »Nortah! « Hide Spoiler And Ryan reveals his second extraordinary gift, the ability to punch us in the FEELS with a single word: View Spoiler »Teacher. « Hide Spoiler <------*WAILS* Beyond that (and in my humble opinion, that is plenty), Ryan managed to shock me, even though I knew—I knew–something terrible was coming: View Spoiler »Frentis just reached out and snapped the King’s neck. He just . . . grabbed him and snapped it . . . No warning . . . Like a twig and just as easily accomplished. OHMYGAWD! « Hide Spoiler

And finally there’s Reva. Yes, that Reva. Much to my chagrin, she became my favorite character. Raised by an abusive zealot priest, she has the unique ability to fight the corrupt priesthood with their own faith.

“‘ Only peace and love can reside in a house blessed by the Father’s sight.’”
“‘ Turn not your gaze from those in need,’” she countered, calling on the Second Book. “‘ For the Father never will.’ Get out of the way, old man.”

She is a paladin in the truest sense, and I typically don’t like paladins. They’re boring, rule-following believers. Ugh. BUT. While she is a believer, she is neither boring nor a follower of rules. Plus, when confronted by the Volarians, she meets them blow-for-blow (or decapitation-for-decapitation).

It was glorious. *bloodthirsty-ness sated*

TOWER LORD was a stellar second installment of Anthony Ryan’s A RAVEN’S SHADOW series: more heroic characters to love, more monstrous villains to hate (a seriously crazy one, too), more glimpses into the long-fallen civilization whence the enemy sprung, just more. Highly recommended to any fan of fantasy literature.